Ohan buzzed Sosa with a left hook early in the fight, found his rhythm and closed the opening round on a strong note, hurting his opponent during an exchange with a snapping right. Ohan pushed the pace in the second, throwing crisp combinations, effectively countering as well.

In the third, Sosa came out more aggressively, keeping Ohan off balance, but Ohan soon regained control. Ohan used his jab more in the fourth and two rights to the head and two lefts to the body put Ohan back in total control.

In total command, Ohan cruised in the fifth and pressed the action the sixth against a game Sosa, who kept coming back every time he looked like the fight was about to be over, right to the final bell.

“He (Sosa) is a tough journeyman,” Ohan said after the fight. “He’s gone the distance with some  good guys. It was a good fight and now we move on to the next one. I’ll talk to Chris (promoter Traietti) and see what’s next.”

In the co-featured event, New Bedford (MA) light heavyweight Edet “Papito” Mkpanam (8-0, 7 KOs) remained undefeated, knocking out Larry “Slo Mo” Smith (13-51-2, 9 KOs) in the third round with a vicious right to the head. Referee Jackie Morrel immediately waved off the fight as soon as Smith hit the canvas.

Mkpanam had nearly put Smith to sleep early in the second round with a left hook that put Smith on his back. The resilient Smith, however, beat the count and continued against his heavy-handed opponent.

The scheduled co-feature for the vacant Massachusetts Middleweight Championship between Julien “Black Dragon” Baptiste (4-2, 2 KOs) and Anthony “The Gentle Savage” Andreozzi (3-2, 1 KO) was canceled midway through the show because Andreozzi became ill in the locker room.

“It was another great show,” Granite State Promotions president Chris Traietti commented. “The Vets Club draws real boxing fans. Everyone stepped up, the hometown guys as well as the out-of-town fighters. Ohan fought an experienced guy and got in some quality rounds. I’m excited about his future.”

Explosive junior middleweight Luke Iannuccillo (3-0, 2 KOs), of Methuen (MA), pounded cagey Las Vegas fighter Rynell Griffin (80-54-2, 2 KOs) from the opening bell, at one point landing 24 unanswered punches when he pinned Griffin on the ropes. Iannuccillo’s dominance lasted right to the end for a shutout, winning all four rounds on each of the three judges’ scorecards.

Brockton’s (MA) David “The Blessed One” Ribeiro (1-0-1, 1 KO) and Rhode Island junior middleweight Alfred “Keenan” Raymond (1-2-1 (0 KOs) fought to a 4-round draw. Riberio, a 20202 New England Golden Gloves champion, started cautiously and fought tentatively for the first two rounds, but he let his go much more in the third, effectively countering the awkward fighting Raymond. It wasn’t enough in the end, though, to pull out a win for the local favorite.

In the opening bout, Brockton heavyweight Kirk Wilmart (1-0, 1 KOs) had an impressive pro debut, flooring Wewerton Silveira Silva (0-4) three times, the last signalling the end as the fight was stopped late in round one.

All the fighters made weight today for tomorrow night’s “The Next Chapter,” presented by Granite Chin Promotions, at Bridgewater Veterans Club in Bridgewater, Massachusetts.

Fighters’ weights are below: 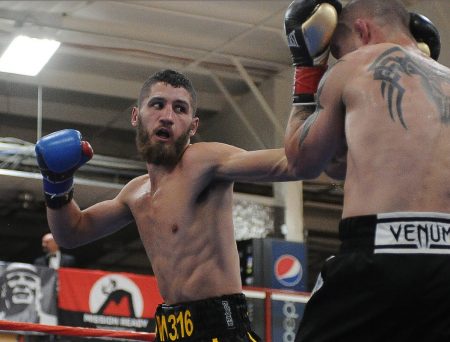 Fighting out of nearby Holbrook (MA), Ohan takes on Argentinian Jonathan “Yoni” Ariel Sosa (7-13-2, 4 KOs) in the 6-round main event, which has future career implications for the fast-rising Ohan.

The popular O’han has a new team – head trainer Matt Ryan, assistants Mark Deluca and Mike Ferragamo – and they’re heading to a higher-level platform in the not-too-distant future.

“I figured I needed a change,” Ohan explained the reason for his new team. “I’m working with a bunch of pros who I’m learning new things from. I’ve been with them around 10 months, my last fight was our first working together. I’m very happy with the change because I’m learning so much.

“I’ve had three fights in a row, plus one other fight in my career, at 140 pounds. I was always light fighting at 147 and felt I never should have fought in that weight class. I just did it to get the ball rolling. I feel like I have more power. I’m still training and sparring with the same sized guys that I was before I stepped down to junior welterweight. I belong at 140!”

O’han and his promoter, Granite Chin Promotions, are on the same wavelength in terms of O’han ascending to a higher-level platform and more significant fights.

“We’re looking at bigger fights and better opponents,” O’han concluded. “I’m in shape and ready for the next step.”

“This is Mike’s second fight with his new team, and I am excited to see the progress continue,” Granite Chin Promotions president Chris Traietti commented. “The goal for the first rt of the year was to keep Mike busy and get him on a national stage by year’s end. As much as we love giving Mike a chance to fight locally in front of his local fans, the goal has always bee to maximize his potential and put him in big money fights.”

Julien “Black Dragon” Baptiste (4-2, 2 KOs), of Woburn (MA), and Swansea’s Anthony “The Gentle Savage” Andreozzi (3-2, 1 KO) will battle in the 8-round co-featured event for the vacant Massachusetts cruiserweight title.

Promising Brockton (MA) welterweight David “The Blessed One” Ribeiro (1-0, 1 KO) meets Rhode Island’s Alfred “Keenan” Raymond (1-3, 0 KOs) in a 4-round match. The 25-year-old Ribeiro was a decorated amateur who captured a gold medal at the 2020 New England Golden Gloves Championships.