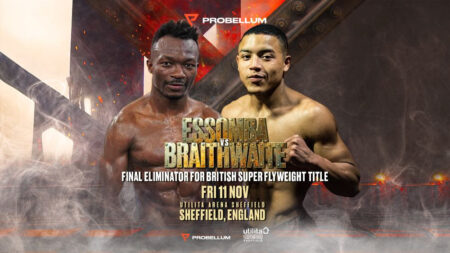 The undercard for Probellum Sheffield just got a whole lot spicier with the addition of an Olympic gold medallist and another British title eliminator.

Sunny Edwards defends his world flyweight title against Felix Alvarado on Friday, November 11 at the Utilita Arena in the Steel City, with Jack Bateson vs Shabaz Masoud providing the fan-approved chief support bout.

And Probellum can today confirm the rest of the card, which makes its debut promotion in Sheffield among the best shows staged in the UK this year – and tickets start at just £35.

Olympic middleweight champion Hebert Conceição is a special addition to the show as he makes his UK debut in an eight-round contest.

The Brazilian hero, 2-0 in the pros, won gold in Tokyo after producing a stunning final round knockout of his Ukrainian opponent and his route to the top of the professional ranks takes him through Sheffield next month.

Thomas Essomba and Marcel Braithwaite will battle it out for the right to fight for the British super flyweight title, at Probellum Sheffield.

Injury delayed their final eliminator but on November 11 the pair – both former opponents of world champ Edwards – clash in a bout that is sure to go down well with British boxing fans.

Sheffield-based Essomba vs Braithwaite, of Liverpool, comes before super bantamweights Bateson and Masoud meet in a final eliminator for the British title, of their own.

One of Great Britain’s most decorated female amateur fighters, Lisa Whiteside, is also set to return to action at Probellum Sheffield, next month.

The ‘Lionheart’ brought an end to a near-three year spell out of the ring, in July, when she dropped the experienced Jasmina Nad, en route to a points win in Newcastle.

Whiteside gears up for world title fights down the line, with a fight in Sheffield, the city in which she was based when part of the Great Britain amateur squad.

The undercard is then packed out with some of Yorkshire’s most talented young fighters, with Sheffield’s ‘Golden Kid’ Kyle Yousef looking to extend his 17-0 record.

They are joined by Sheffield-based Nicolie Campbell – the ‘Pretty Boy Assassin’ – as well as Leeds’ unbeaten Ishmael Davis (9-0) and Bradley Cousins, a light heavyweight prospect from Doncaster.

Tickets for one of the UK’s best shows of 2022 can be bought here, via fighters or by searching for ‘Probellum Sheffield’ at Ticketmaster.