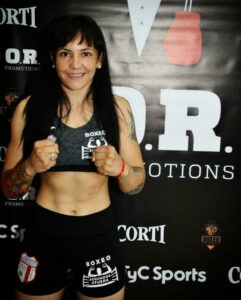 After two postponements and changes of opponent, finally Maira Moneo stepped into the ring this Saturday night at the Complejo Multifunción de Pérez, in the province of Santa Fe, Argentina, against the local Romina Guichapani. With a resounding TKO in the ninth round, Moneo became WBA FEDELATIN 135 lbs. Champion.

The fight was of great intensity. Two aggressive boxers who gave their all without hesitation. Moneo managed to take the lead more clearly from the second half of the fight when she began to land better combinations that ended up demolishing the experienced and strong Romina Guichapani.

In the ninth round, Guichapani suffered a protection count and immediately after, Moneo’s offensive was relentless until the towel and the referee put an end to the fight.

By winning this title, the boxer known as “Panterita” is well profiled in a category filled with talents, but the absolute reign belongs to the Irish Katie Taylor. Due to the boxing quality that Moneo has shown, she has been named among boxers such as Jennifer Han, Melissa St Vil or Estelle Mossely.