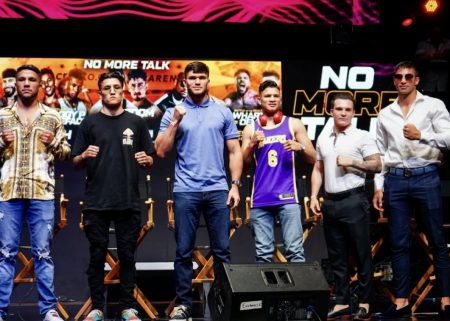 Presented by Bash Boxing in association with Simply Greatness Productions and NextGen Boxing, Social Gloves: No More Talk is set for Saturday, July 30 at the Crypto.com Arena (Staples Center) in Downtown Los Angeles.

Tickets starting at $50 may be purchased at AXS.com. The event will be broadcast by Integrated Sports Media who will distribute the event across North America live on Pay Per View via DirecTV, iN Demand, DISH, and Shaw PPV and to commercial establishments across the U.S. priced at $39.99. Additionally, it will be broadcast via PPV online at SocialGloves.tv.

The event is headlined by a professional boxing clash between International YouTube Superstars Austin McBroom of Los Angeles, CA and AnEson Gib from the United Kingdom. The six-round professional bout will be contested at a weight limit of 180lbs.

Two additional YouTube superstars lace up the 10oz. gloves and step into the pro ranks for the first time in a West Coast vs. East Coast Battle between Landon McBroom and Adam Saleh.

An additional highly anticipated exhibition clash on the Social Gloves: No More Talk undercard includes the Battle of the Reality Stars, Corey Wharton vs. Chase DeMoor.

Below are quotes from the participants.

“This will be ten times worse for Gib as I’ll be using 10oz. gloves instead of 16oz. This makes a huge difference and I’m in much better shape than I was for my last fight. My full focus is on giving him all the attention he needs. He’s going to be really embarrassed for taking this fight and he will regret it.”

“I’m very excited and I’ve been taking training for Austin very seriously. This is my fifth training camp and on July 30 I’m going to show my boxing IQ and my spirit. I’ll be ready for victory on July 30. We’re 18 days out from the fight and I’m here to take out the CEO of Social Gloves.”

“BlueFace ain’t thinking right if he doesn’t think I’ll be ready. I’m just not showing it off on social media yet. He didn’t realize until he got here today how much bigger and more athletic I am. I got power he can only imagine. He idolizes me and wants to be the athlete I am.”

“I said yes to this fight immediately. Swaggy ain’t ready for this, he doesn’t look ready. He’s not putting up any training videos on social media, wearing those baggy clothes today. I definitely have the advantage, I’ve boxed before. I was very comfortable against Kane Trujillo and I’ll be more comfortable on July 30.”

“Adrian is a great opponent, I couldn’t ask for a better name. I watched him throughout my career and he was a big influence on the football field. Training has been going very well but they always say you can’t play boxing and fans will see that from us on July 30. Last year I sat out almost the whole year and focused on boxing. This has been a great transition for me physically and mentally. This is definitely not a one-off for me.”

“I’m excited for this opportunity and look forward to the challenge. I’ve always gotten excited about new challenges. I’ve been in the lab, working and grinding, to get ready to fight on July 30. We have mutual respect but when we fight it will be different. Boxing is similar to football but different as it’s one on one, the key is to be physically ready. I’m all in on my training and can’t wait until July 30.”

“I’m very excited to be fighting Adam on July 30. I appreciate him taking this fight. Being from LA this is a very big deal for me to be fighting at the Crypto.com Arena. It’s important that Austin and I support each other, we’re very close. If he doesn’t win I don’t win and if I don’t win he doesn’t win. I’m pushing him and he’s pushing me. I’m going to show off my skills but he’s definitely not making it out of the third round.”

“East Coast we’re just built differently, we’re more real. No offense to the people in LA but you act too Hollywood. East Coast has much better fighters. I’m going to show you how real we are on the East Coast. Landon and I are definitely going to have an exciting fight. It’s going to be the fight of the night. You’ll see my hand raised at the end. He’s going to try and take my head off and I’m going to try and take his off.”

“Chase is all talk and on July 30 I’m going to prove that. This beef just started recently, he’s jealous of me. He’s a coward. He’s not making it out of the second round.”

“I’ve got a great team behind me and I’ve been training very hard for this fight. I’m used to big moments and this is one of the biggest. He’s just another notch on my belt. He’s on his way out. He’s not making it out of the third round.”