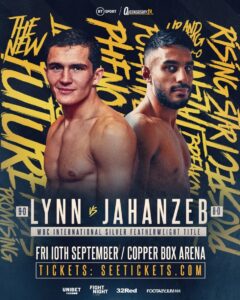 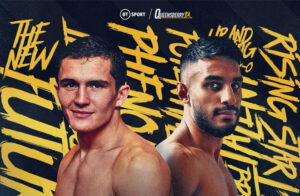 The opening night of Queensberry’s series of shows with the spotlight placed on top prospects will take place at the Copper Box Arena on Friday September 10, live on BT Sport. The show will also be available live and free on the BT Sport Boxing YouTube channel.

To mark the occasion, two unbeaten young featherweights will top the bill with the WBC International Silver title at stake and thrills and spills guaranteed.

The champion, Louie Lynn (9-0, 7 KOs) from South London will defend against Bradford’s Amin Jahanzeb (8-0, 2 KOs) over 10 rounds in a fight that will bring about a fascinating clash of styles.

‘Loco’ Lynn, 25, is a relentless volume puncher who goes for the jugular, whereas Jahanzeb, also 25, likes to employ slick skills and clever footwork to unpick his opponent.

Peacock Gym man Lynn won his WBC strap last time out in a big step up against the 12-1 Spaniard Sebastian Perez in March, also at the Copper Box. Jahanzeb last fought in September and recorded a points victory over six rounds against Jamie Quinn at York Hall.

Also on the bill, which falls the night before Sunny Edwards makes a first defence of his IBF world flyweight title against Jayson Mama, former Olympic Youth gold medallist Karol Itauma in his fourth professional fight.

The Chatham light heavyweight has enjoyed a successful introduction to the pro ranks and has executed knockout finishes to his last two fights.

The card also features the super welterweight cousins Josh and Levi Frankham, who will be taking part in their fourth and third fight respectively, while super bantamweight Adan Mohamed from Buckhurst Hill will have his third fight over four rounds. Middleweight Jonathan Kumuteo from Muswell Hill will make his second appearance as a professional.

Two highly-anticipated professional debuts complete the card, with Rotherham’s double National champion and former England international Junaid Bostan taking his first step as a pro. The 19-year-old boxes out of the Steel City Gym in Sheffield, where he works alongside Sunny Edwards under the stewardship of leading trainer Grant Smith.

The Liverpool boxer, 22, who had 96 amateur bouts, is trained by Joe Gallagher in Bolton.

“I am delighted to be launching our new series of shows on September 10 ahead of world title action the following night,” said promoter Frank Warren. “It will give the fans a double helping of boxing to look forward to and, on the Friday, our young stars will have the show to themselves and a big chance to shine.

“I would like to again thank BT Sport for getting behind this project and supporting the sport at another level. This is an opportunity for people to identify talent at an early stage and get behind the ones who catch their eye.

“I am thrilled that we are kicking off with a cracking prospect v prospect battle between Louie Lynn and Amin Jahanzeb and I hope we get to see more of this type of match as we move forward. Viewers will have seen a bit of Louie previously, but this is his chance to headline the show and adapt to a different set of circumstances. For Amin it is a huge opportunity for him to show us what he’s got and stake his claim for a higher place in the pecking order.

“I am also looking forward to seeing the continued development of the other fighters on the bill and officially welcoming Junaid Bostan and Callum Thompson to the Queensberry fold.”

Tickets for LYNN vs JAHANZEB are available here 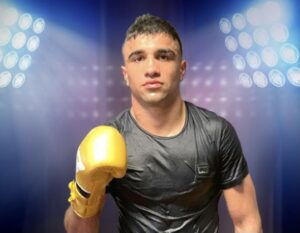 He might share his name with ‘The Greatest,’ but the Bradford boxer believes he is also heading to the top.

Ali, 25, hopes to make it a hat-trick of professional wins when he faces Lee Glover (11-4, 3 KOs) at London’s Royal Albert Hall on Saturday July 10, live on BT Sport.

The 2016 Olympian is already talking of moving up in class and conquering the best with the ultimate target American ace Shakur Stevenson.

Sharp is also in action on the impressive Royal Albert Hall bill on July 10th, when he faces Marcio Soza for the WBO Global belt.

“I have got no animosity towards Archie. I just want to fight him. It will be entertaining.

“We sparred when we were on Team GB when I was a Flyweight and he was a bit heavier but we’re almost the same weight now.

“Louie Lynn is also very good. He has a similar style to myself  – is busy and throws a lot of punches.

“I beat him quite easily in the Senior ABAs but that was five or six years ago. Time moves on and anything could happen.”

Stevenson is tipped to become an all-time great, and Ali who is trained in Manchester by Anthony Farnell accepts that dream match is some way off still.

He added: “If I keep doing well and get up to that level I would love to fight him. Hopefully we can that fight on down the line.

“If I keep winning and move up to that weight, I would love that down the line.

“I am a big Featherweight and it will be natural for me to move up. I don’t think I will have to try too hard.”

Ali turned professional in February 2020 with a disqualification win against Stefan Sashev, and followed that up in December by outpointing Jamie Quinn.

He hopes former English title challenger Glover will be more ambitious than his previous professional opponents.

Ali said: “For my last opponents I might as well have stayed in the gym and punched a bag. Hopefully this guy throws something back.” 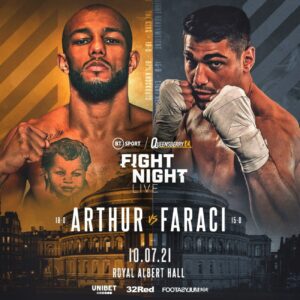 Lyndon Arthur has a target on his back, but he isn’t about to hide from the world’s top Light-Heavyweights.

It’s the Manchester man’s first fight since a narrow points win against Anthony Yarde last December, that earned Arthur number one spot in the WBO rankings.

If Arthur keeps winning he will get a crack at WBO champion Joe Smith early next year, but Faraci and Yarde who is chasing a quick rematch fancy their chances of his precious top spot.

“It’s a world title for Faraci and any of these guys who want to face me because they want my number one ranking,” said Arthur who is also Commonwealth champion.

“There is no pressure now that I am number one in the WBO rankings.

“Faraci has got a decent record to be fair. He has beaten some undefeated kids and a few had winning records.

“He is coming to win and doesn’t know how to lose. I have to show him how to lose so I am excited for the fight.”

Smith will be due to make a mandatory defence early next year, but looks certain to have at least one more defence before the WBO order the fight.

Arthur, 30, who is also top ten ranked by the IBF and WBC added:  “Joe Smith is the man I want because he has the world title right now. There is talk of him fighting Daniel Jacobs and if he won then he is the man to beat.

“Smith is good, tough, rugged and comes to fight but I believe I am better than him as I’m supposed to.

“I just have to keep winning and the big chance will come. I will be the mandatory and the WBO champion will have to fight me.”

He says there is a contract for the Yarde rematch and wants that soon, but Arthur says: “We will see what happens with the Yarde rematch. I don’t know too much about it and I am not fussed about it.

“I want a world title fight more than anything. There is no rush for it, but I will fight anyone.

Tickets are on sale now, available via the Royal Albert Hall here