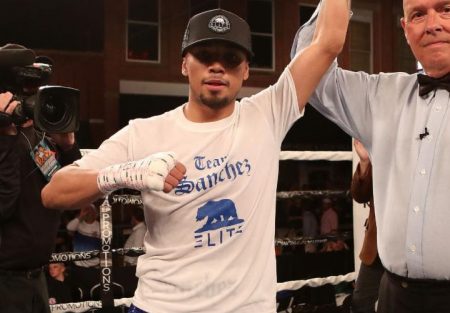 In the opening round both fighters were looking to establish their jabs but started to let their hands fly once they started to land hard shots. Sanchez was the aggressor, landing nice combos, while Estrella was countering landing some nice overhand right hands. Both fighters continued to let their hands go in round two, but it was Sanchez who was getting the better of the exchanges. In round three, Sanchez landed a left hook to the body that sent Estrella to the canvas. Estrella couldn’t recover and the bout was stopped at the 1:36 mark. With the win Sanchez inches closer to a world title shot and has big plans for 2022.

“We were both going for it from the opening bell, and I knew eventually I was going to land a big shot,” said Sanchez. “When I landed that left hook to the body, it was a perfect shot, and I took him out. I’m hoping early next year I’ll be able to fight for a regional title, with the hopes of fighting for a world title by the end of the year. I feel I’m ready to take on all the champs at bantamweight and super bantamweight.”

In the 8-round co-main event, a battle of undefeated super lightweights commenced as Ruben Torres (17-0, 14 KOs) remained unbeaten as he defeated Francisco Armenta (12-1, 4 KOs) by way of a fourth-round knockout.

Torres came out firing and looked sensational from the opening round, landing powerful blows to the head and body. Armenta had a few moments where he landed some nice left hooks but Torres steam rolled him, dropping him twice in round three, and again in round four. Armenta’s corner seen enough and stopped the fight at .56 mark of round four.

“I felt very strong going into this fight and all the hard work I put into the camp was on display.” stated Torres. “I feel like next year will be a year where more people will start to see me as one of the top prospects in boxing. I’m still learning but I’m getting better as my career develops. 2022 will be a big year for me.”

In a super featherweight division crossroads fight, Brandon Benitez (18-2, 7 KOs) defeated Anthony Chavez (9-2-1, 3 KOs). In the first round, Benitez dropped Chavez with a jab to set the tone of the fight. Benitez was the one forcing the action as he applied a tremendous amount of pressure, forcing Chavez to fight on the inside. Chavez was landing some clean shots, but it was Benitez who was doing the most damage with his all-out attack. Benitez outworked Chavez throughout the fight and scored an unanimous decision. Scorecards read 77-74 and 79-72 twice.

“This was a huge win and its going to help me get closer a big fight,” Benitez stated. “I’ve been training hard and I’m proving my self to be on a world class level. I know if I continue to work hard, I’ll put my self in position to fight a top name. I was very happy with my performance.”

In a scheduled 6-round super bantamweight bout, Manuel Flores (11-0, 9 KOs) defeated a game Leonardo Torres (9-15-1, 5 KOs). Flores who fights out of the southpaw stance, thoroughly dominated the fight, but it wasn’t as easy as it looked on paper. Torres fought with a lot of heart but couldn’t withstand the pounding that Flores was giving him. Flores dropped Torres with a vicious body shot in round four and the fight was stopped at the 2:50 mark.

“I came out and did what I envisioned and got the knockout,” said Flores. “I was in control the whole fight until I stopped him. I feel like I’m taking my career to the next level with all the dedication I’m putting into my career. Soon I’ll be ready to fight any of the top prospects in my division.”

In the opening bout of the night, super bantamweight, Ivan Zarate (3-0, 1 KO) annihilated Roberto Rodriguez (1-1, 1 KO). Zarate dropped Rodriguez with an overhand right just 10 seconds into the contest, then again with a straight right at the 50 second mark. Rodriguez couldn’t get up and the fight was over.”

“My power showed up tonight as I wanted to make a statement in this fight.” said Zarate. “This guy was undefeated coming into this fight, so I wanted to show everyone that I’m on another level. This was my first knockout and it felt great.”

For more information, regular updates on our fighters, events, and promotions, please visit ThompsonBoxing.com. You can also follow the conversation on social media, please use #ThompsonBoxing. TBP Mobile App is now available for download on Google Play (Android) and Apple’s App Store (iPhone).