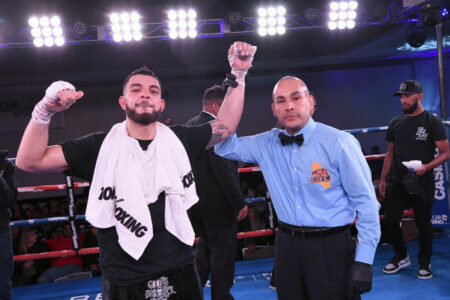 Both fighters had their moments throughout the fight, but it was Lopez who was landing harder punches. Every round was close, but Lopez outworked Gutierrez for a majority of the scheduled 8-round bout. Lopez’ hand speed was a major factor as he landed his flurries with precise accuracy. Scorecards read 80-72, 79-73, and 76-76.

“Winning this fight against another undefeated prospect, my third in a row, has got my confidence level to an all time high,” said Lopez. “I knew if I stuck to my game plan and just boxed, I would come out on top. I’m hoping I’ll be making my entrance into the top fifteen of one of the sanctioning organizations, with the hopes of fight for a regional title next year.”

In the 8-round bantamweight co-main event, Manuel “Gucci Manny” Flores (14-0, 12 KOs) of Coachella, California, destroyed Armando Torres (26-23, 19 KOs), of Mexico City, in the first round. Flores sent Torres to the canvas three times before the fight was stopped. The first two were body shots, and the last was a left hook, right hook combo. The fight was halted at the 1:35 mark of round one.

In bout number three, middleweight Nelson “Nuckle” Oliva (5-0, KOs), of Rialto, CA, annihilated Mike Plazola (2-3, 1 KO) of Waterloo, IA. The scheduled 6-round bout only made to the .59 mark of round one. Oliva dropped Plazola three times before the fight was stopped.

In the second bout of the night, a scheduled 6-round lightweight contest, Erick “Aidahoe” Garcia Benitez (4-3, 1 KO) of Guadalajara, Mexico, upset Ioannis “The Greek Assassin” Manouilidis (3-1) of Los Angeles, CA. Benitez was relentless in his attack and dropped Manouilidis with a right hook in round one. Manouilidis was cut under the left eye in round four by a punch but continued. Both fighters were engaging, throwing hard shots throughout the entire fight, but it was Benitez that was getting the best out of the exchanges. Scorecards read 59-54, 59-53, 58-54.

In the opening bout of the evening, super lightweight Juan Sanchez (5-0, 5 KOs), of Buena Park, CA, scored a second-round knockout over Miguel Angel Barajas (3-2, 2 KOs), of Guadalajara, Mexico. Sanchez showed great composure as Barajas was throwing wild punches but couldn’t land anything meaningful. Sanchez kept coming forward and landed a powerful right hook to the temple, sending Barajas to the canvas in round two. Moments later, Sanchez landed a flurry of punches to the head of Barajas forcing the referee to stop the fight at the 2:34 mark of round two. 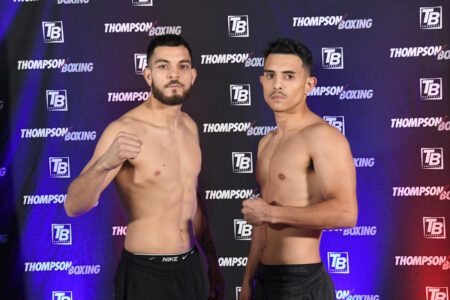 “Path to Glory” will take place at the Doubletree Hotel in Ontario, CA on Friday, November 18th, 2022. Doors open at 6:30 pm PT with the first fight starting at 8:00 pm PT. Tickets are priced at $50, $75, $100, and $125 and are available for purchase by calling 714-935-0900 or online at www.thompsonboxing.com. Fight fans will be able to watch all Thompson Boxing fights, weigh-ins, and behind-the-scenes content, via their new mobile app downloadable on Apple and Google.

Rich Marotta will operate as the blow-by-blow commentator with expert commentary by Doug Fischer.

This event is sponsored by HUSTLER Casino, LA’s only luxury casino; 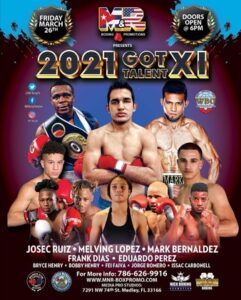 Fight Notes: Gutierrez was down three times in the 1st round. Time of the stoppage was 2:15 for a Lopez 1st round knockout victory.

Fight Notes: Time of the stoppage was 2:34 of the 2nd round for a Ruiz knockout victory.

Fight Notes: Time of the stoppage was 1:56 of the 1st round.

Fight Notes: Time of the stoppage was 1:01 of the 1st round.