Cameron vs. McGee kicks off undisputed tournament next month 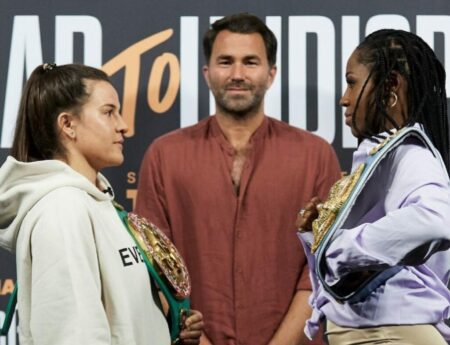 Chantelle Cameron is more determined than ever to hold every belt possible as she gets ready to take part in the ‘Road To Undisputed’ super-lightweight tournament next month.

The winners of each fight will then square off, and Cameron is determined to move one step closer to claiming all the belts when she meets McGee at the O2 Arena in London on October 30.

Cameron said: “It’s amazing to be given this chance. Since I turned professional it’s always been the dream to be undisputed, and now I’m two fights away from it being possible.

“Having the chance to box some strong, tough champions has motivated me and given me the kick where I can show people what I can do now, and I’ll be in some great fights. It’s just amazing to get another fight this year, especially after the Vegas debut in May.

“Ring rust may be a factor for Mary, but I’ll never be complacent. I’m sure she’ll be ready and just as hungry and eager as me to get this belt. She’ll bring the best version so I need to be a level above.

“When I was told the Ring Magazine belt was also on the line, I thought wow. I just want every single belt, and I can’t think of anything else I want more in my life than to hold all of those belts.

“I’ve got to focus on Mary though. This is a tournament but I’m just fully focused on this fight, as if I don’t get through this then the final is not important.

“The gym is buzzing at the moment and there is such a good vibe. I have two of the best men in the game in my corner backing me, and every performance I have I’m getting better. I’m excited for my fight and it will be best Chantelle that you’ll see.”