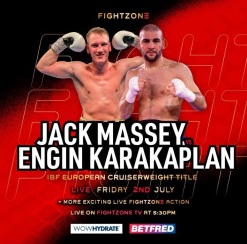 Fight Notes: In a bout with two-way and competitive action, Massey finally broke through with a right-left combination that put Karakaplan on the floor. The corner threw in the towel with referee Michael Alexander waving off the bout at 1:40 of round 4.

Fight Notes: Martell usually fights at a lower weight, this bout was scheduled at heavyweight.

Martell came out for the 1st round fast, catching Nazaryan on the waist band with Nazaryan claiming a low blow. The referee gave him time to continue.

The one-way action continued with Martell finally decking Nazaryan with a body shot to the right side of the ribs. Referee Andy Brook administered the count, reaching the count of ten for a Martell knockout victory.

Martell spoke of moving down to light heavyweight but looking at his physique, cruiserweight will probably be more suitable for his frame.

Fight Notes: The original opponent for Baggaley pulled out of the bout a day before, which was slated as Baggaley’s pro debut. In came two time world title challenger Hannah Rankin with the bout changed to an exhibition.

As the bout was an exhibition, no score was announced with both fighters hands raised by the referee at the end of the end.

Fight Notes: The bout went the full 4 round distance with Harker winning by the referee’s score of 40-36.