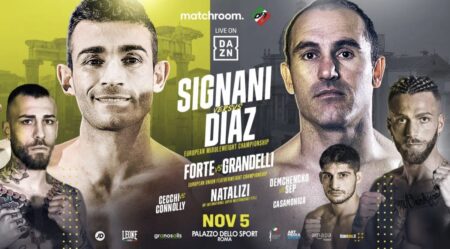 On November 5 at Palazzo dello Sport in Rome (Italy), European middleweight champion Matteo Signani will defend against Spanish Ruben Diaz on the 12 rounds distance in the main event of the Roma Boxing Night, promoted by Opi Since 82-Matchroom-DAZN and streamed live in 200 countries by DAZN.

Born in Cesena, Italy, 42 years ago, professional since April 2007, nicknamed “Il giaguaro = the jaguar” Matteo Signani built a record of 38 fights with 30 wins, (11 inside the distance), 5 losses and 3 draws. He won the vacant European middleweight belt beating on points Gvorg Khatchikian in Trento (Italy) on October 11, 2019 and defended it knocking out Maxime Beaussire (France) on October 10, 2020 in Caen (France). In his way to the top Matteo Signani also won the Italian and European Union middleweight titles.

Professional since October 2002, also 42 years old, nicknamed “El destructor = the destroyer” Ruben Diaz has a record made of 30 fights: 26 victories (17 inside the distance), 2 losses and 2 draws. He won the titles of Spanish and European Union middleweight champion. In the super middleweight division he became champion of Spain. He told to the Spanish press that he wants to become European middleweight champion to close his career with a big win. That’s enough to understand that he will give 100% in the ring on November 5.

Matteo, where are you training for this fight?

“I train at Ring Side Boxe gym in Rimini as usual. My coach is Gian Maria Morelli, while the cutman is Daniel Scarpellini. They will be at my corner during the fight. I am used to work with them and as the saying goes ‘Never change a winning team’. Right now, I am in Nurimberg (Germany). I wanted to make an experience abroad and spar with new fighters. This gym is full of professional fighters and that helps me for a fight with the European title on the line.”

Are you in top shape?

“Yes, I am ready for Ruben Diaz and I will beat him.”

If you win, will you defend for a third time the Euro title?

“I don’t make long term projects, but everybody knows that my dream is to fight for the world middleweight title.”

Do you consider yourself a fighter or a boxer?

“I consider myself a complete fighter. I can box, but if my opponent opens his guard I can knock him out.”

Do you have a fighter as role model?

In the co-main event of the Roma Boxing Night, European Union featherweight champion Mauro Forte (16-0-1 with 6 KOs) will put his belt on the line against Francesco Grandelli (15-1-1 with 3 KOs) on the 12 rounds distance. Italian female super bantamweight champion Maria Cecchi (5-0 with 1 KO) will face Bec Connolly (UK, 3-10) on the 8 rounds distance. In the light heavyweight division, Serhiy Demchenko (Ukraine, 23-15-1 with 15 KO) will fight Hrvoje Sep (Croatia, 10-0 with 8 KOs) on the 6 rounds distance. Also, two Italian prospects: super welterweight Mirko “Terminator” Natalizi (11-0 with 7 KO) will fight for the IBF International belt and super lightweight Armando Casamonica (3-0) will fight for the third time this year. The names of their opponents will be announced soon. 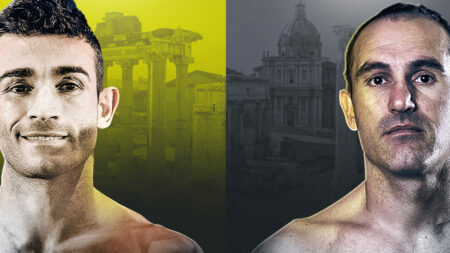 Matteo Signani will defend his EBU European Middleweight Title against Ruben Diaz at the Palazzo dello Sport Roma on Friday November 5, live around the world on DAZN.

‘Il Giaguaro’ (30-5-3, 11 KOs) captured the vacant European 160lbs crown by outpointing Gevorg Khatchikian at the PalaTrento in October 2019 before stopping Maxime Beaussire in two rounds in his next defence in France a year later.

Diaz (26-2-2, 17 KOs) fights for the EBU Title for a second time after he lost out to Polish World Title challenger Kamil Szeremeta in September 2018 – one of only two losses the former Spanish Middleweight Champion has suffered in his 30-fight career.

Eddie Hearn, Matchroom Sport Chairman, said: “I’m delighted to be returning to the beautiful city of Rome for our fourth and final show of the year in Italy. It’s another big night of title action topped by Matteo Signani defending his European Middleweight crown against Ruben Diaz. Catch all of the action live and on demand on DAZN.”

Christian Cherchi, OPI Since 82, said: “We are very happy to return to Rome after the amazing show at the Pietrangeli Stadium 2 years ago. Signani vs. Diaz, Forte vs. Grandelli and Natalizi in his first Title attempt. It’s set to be a great night of boxing live and on demand on DAZN!”

Tickets will be available soon via ticketone.it