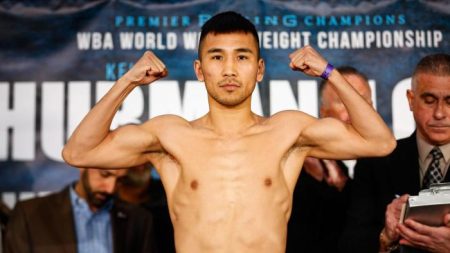 Vic Pasillas was originally scheduled to face Nyambayar, but was forced to withdraw after a positive COVID-19 test.

Nyambayar (12-2, 9 KOs) won a silver medal representing his native Mongolia in the 2012 Olympics and now lives in Southern California, where he’s trained by John Pullman. The 29-year-old ascended the featherweight rankings after his extensive amateur career with victories over then unbeaten Harmonito Dela Torre and former interim champion Oscar Escandon. He earned his first world title shot by defeating former champion Claudio Marrero in January 2019, before dropping his championship bout against Russell on SHOWTIME. Nyambayar returns to the featherweight division after challenging top 130-pounder Chris Colbert in a July contest he lost by decision.

Lukas (25-1, 17 KOs) steps into the ring looking for his third straight win to put himself in position to vie for a world title. A native of Omuthitugwalwani, Namibia, his U.S. debut came in December 2020 as he dropped a 10-round decision against Mexican contender Isaac Avelar. Lukas, who has fought professionally since 2011, bounced back from the defeat by knocking out Mario Macias Orozco in February 2021 before earning a decision victory over Marco Antonio Chable in March 2021.