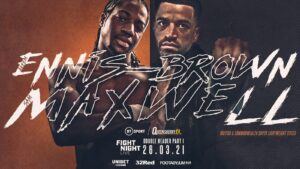 Sam Maxwell says the delay to his big fight against Akeem Ennis-Brown has worked in his favour.

Gloucester’s Ennis-Brown  (14-0, 1 KO) was due to defend his British and Commonwealth Super-Lightweight titles against Maxwell in March, but pulled out injured days before they were due to meet.

He will now make the first defence of his titles against Maxwell (15-0, 11 KOs) at Utilita Arena, Birmingham on Saturday August 28, live on BT Sport.

Maxwell had to be content with a non-title points win over Ben Fields when Ennis-Brown pulled out, but he couldn’t be happier.

He joined Manchester trainer Steve Maylett shortly before their clash was scheduled giving them little time together.

Maxwell explained: “It was a blessing in disguise that Akeem pulled out. I was a bit gutted at the time because it was my first top of the bill and I was ready to go.

“But, I’d only had five weeks with Steve. I’d been doing stuff with Danny Vaughan and on my own.

“Now I have had five months with Steve and it has worked out for me well.

“Steve told me that had it been anybody else with five weeks’ notice for a British title fight he wouldn’t have taken them on.

“He did because he’d known me well for 15 years and I used to go to the gym and spar with Terry Flanagan. Steve realised I needed something. He knew me and liked me so he took me on.

“When I first went to him and the fight was around the corner, Steve said; ‘I can give you tactics, tell you how I want to fight and get you fit for 12 rounds’.

“That is all we focused on for those few weeks. Now we have a long time to get things right with the game plan. I know if I follow that through I will win this fight.

“Steve is a really good tactician and what he wants is going to work. It is about me following orders and making sure I deliver on fight night.”

“I am very good at the basics, a very good technical boxer. That has got me where I am and I can punch. I am going to perform and I can’t wait to show everyone.”