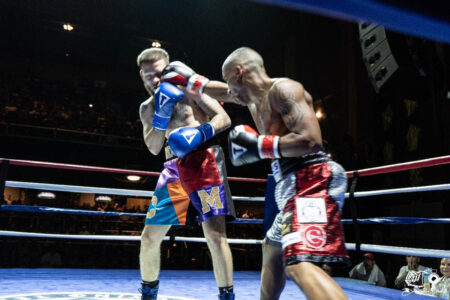 Rivera Promotions Entertainment (RPE) is bringing professional boxing back to Webster, Massachusetts, for the first time in 27 years on Saturday night, December 18, at Webster Town Hall.

RPE’s popular “New England Future VIII” will be headlined by a rematch of arguably the 2021 New England Fight of the Year to date between Puerto Rico-native Wilfredo “El Sucaro” Pagan (6-1-1, 3 KOs) and Carlos Marrera III (2-6-2), who fought to a, thrilling 6-round split draw this past August 14th in Worcester (MA).

Three-time, 2-division World champion, RPE promoter Jose Antonio Rivera, fought in the last show in Webster back on November 18, 1994, when the then 11-0 Rivera stopped Gerry O’Campo in the fourth round at Municipal Auditorium. Rivera also fought at the Municipal Building in Webster on December 10, 1993, knocking out Julio Torres in round three. Fighting on that same card was his close friend, 3-0 Worcester heavyweight Bobby Harris, whose son Bobby “BH3” Harris, III will be fighting on the RPE Dec. 18th card.

“Being able to run a boxing event at the Webster Town Hall is very exciting for me,” Rivera said. “I remember fighting there in ’93 and ’94 and the place being packed. The fans are so close to you, it has a Blue Horizon feel to it with fans right above your head in the balcony section. In our ‘New England Future’ series, we like to showcase boxers from all over New England and we are happy to bring that to Webster, Massachusetts. The fans will not be disappointed with our line-up of boxers from Worcester, Connecticut, Rhode Island, Lowell, Southbridge and other cities and states throughout New England.”

Pagan, fighting out of Southbridge (MA), and Bridgeport’s Marrero, III (2-6-3) will be fighting again for the vacant New England Super Lightweight Championship in the 6-round main event.

The original Pagan-Marrero was an extremely entertaining, non-stop clash in which momentum swung round by round from one fighter to the other. One judge scored the fight 58-56 in favor or Pagan, another 55-59 for Marrero, and the last 57-57.

Harris (3-0-1), a two-time national amateur champion and World Games Silver medalist, faces an opponent to be determined in a 4-round super middleweight bout.

Worcester middleweight Eslih Owusu (6-0, 4 KOs), a native of Ghana, puts his undefeated record on the line in a 4-rounder versus Maycon Oiler Dasilva (0-3), fighting out of Concord (NH) by way of Brazil.

Additional bouts will soon be announced. Card is subject to change.