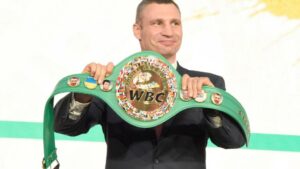 Today the boxing family puts its hands together, applauding and celebrating the birthday of Dr Iron Fist, the Pride of Ukraine and all time great WBC champion Vitali Klitschko.

Vitali was born on this date in 1971, in Belovodsk, Kyrgyzstan, in the former Soviet Union. He began his illustrious career as a professional boxer in 1996, winning his first 24 matches almost all by knockout.

He won the WBC heavyweight title on April 24, 2004, defeating Corrie Sanders by KO at the Staples Center, Los Angeles, it should be noted that Vitali made 11 defenses of his title between 2004 and 2012, before he retired.

With an impressive record of 45 fights won, 41 of them by knockout and only two losses, Vitali is considered by many experts and boxing fans,  as the greatest heavyweight of an era, being one of the boxers with the highest KO ratio.

Vitali is an inspiration to all, first for feats and hands on power in the ring, but also in the political sphere. He is Mayor of Kiev, where he strives as a champion of democracy, law and order, equity and economic progress leading to prosperity.