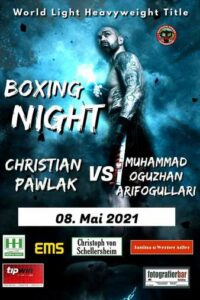 Fight Notes: Arifogullari was counted over in round two when Pawlak unloaded a series of body-shots and only the ropes held him up, and in the third he was floored again by a left hook to the body. He beat the count, but then went on to push Pawlak out of the ring. While he also fell out of the ring himself, referee Kazim Kurnaz decided it was an intentional foul and that Arifogullari should be disqualified, consequently declaring Pawlak the winner.

Fight Notes: Score was 59-54 for a Dragotta points victory over 6 rounds..

Fight Notes: Score was 59-54 for a Krebs points victory over 6 rounds.