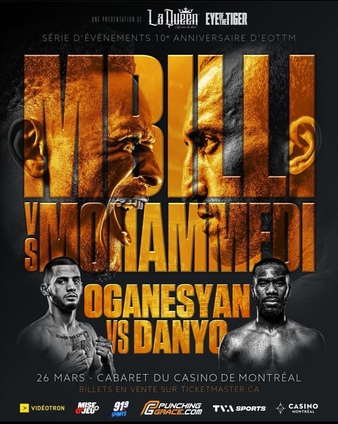 The French flag will be flying on March 26 at the Casino de Montréal when Christian “Solide” Mbilli (20-0-0, 18 Kos) will defend his WBC Continental of the Americas belt against his fellow countryman, Nadjib Mohammedi (44-8-0, 27 Kos). This duel will be part of the 3rd event of the EOTTM 10th Anniversary series, which will also feature Artem “Razor” Oganesyan (12-0-0, 10 Kos) facing off against veteran Stephen Danyo ( 20-4-3, 7 Kos) of Holland.

On December 11, Christian Mbilli made a name for himself by defeating American Ronald Ellis in the most important victory of his career. Following this stellar performance in which he dominated in every round, “Solide” ascended to the 8th world ranking of the WBC. Mbilli is aware that Mohammedi is a seasoned boxer who has confronted the greatest names of his division and who is on a winning streak following three victories by KO in his last three fights. Mohammedi, who has put in over 300 rounds in his professional career, is a clear and present danger to Mbilli, and this fight is an excellent opportunity for “Solide” to demonstrate his prowess.

Although Nadjib Mohammedi is a boxing icon in his native France, he wants to prove that he is still part of the elite on the world stage by defeating young hopeful Mbilli. The EOTTM team is very much aware of the importance of this potential victory that would showcase Mbilli’s skill and ambition, and prove that he has a place on the world stage. “While Mohammedi had already attained the highest summit of boxing in France, Mbilli was sharpening his skills in the ranks of amateur boxing. This clash will be a classic example of youth vs. experience. Mbilli will have to be careful, as Mohammedi is an excellent and powerful counter-puncher,” explained Marc Ramsay, development director and Christian Mbilli’s trainer.

Ranked 18th in the world according to BoxRec, Nadjib Mohammedi has established a solid reputation on the international scene over the years, confronting the biggest names of his division. In 2012, he became WBC light heavyweight world champion by defeating Doudou Ngumbu. He then went on to defeat world hopeful Lee Campbell, establishing himself as one of the elite in his category and gaining access to Sergey Kovalev as well as ex-world-champion Oleksandr Gyozdyk. He also put up a solid opposition to eventual world champion Vladimir Shishkin, as well as to Evgeny Shvedenko.

In the semi-final, Artem Oganesyan will enter the ring for the first time since his move to Montreal, accompanied by his trainer, Marc Ramsay. More than eager to get back into action before his Québecois fans, “Razor” aims to quickly dispatch his opponent, Stephen Danyo, by treating him to his first K.O. All the fights on this boxing card will be simulcast on Punching Grace on March 26. For more information, please visit www.eottm.com or www.punchinggrace.com.