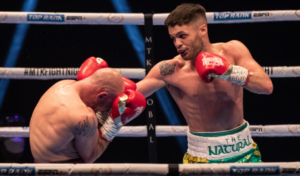 James McGivern got his professional career underway with two fights in England in 2020 – but none will feel as special as when he returns home to Belfast to compete on the memorable card at Falls Park next week.

Undefeated McGivern (2-0) is set to go up against Ed Harrison on the Conlan Boxing and Top Rank event in Belfast on Friday 6 August.

McGivern entered the paid ranks in style with dominant points wins over Jamie Quinn and Jordan Ellison, displaying the elite boxing skills that saw him win a bronze medal at the Commonwealth Games in 2018.

Both of those fights were behind closed doors, and the 23-year-old now has the chance to show fans back home exactly what he is capable of.

McGivern said: “It’s an amazing opportunity to be on a card this big. I think this might be the biggest card Belfast has ever seen as there are so many talented fighters on it, so I’m just glad I get to be part of it.

“This will be like another debut for me really, and 8000 fans is going to be the biggest crowd I have ever fought in front off, so it’ll be great to be in there and feel the energy of the crowd while I’m working.

“I’m immensely proud of being Irish and living here. I’ve been across the planet fighting and always can’t wait to be back home in Belfast. I was born and bred in this city and I can’t wait to be home again in front of my people.

“Ed Harrison fought on the Golden Contract card the same night as me, so I know a bit about him. He’s been in with some top guys such as Isaac Lowe, so I know I’ll have to be on top form.

“I’m still only young in this game and I don’t look past anything or anyone, but all being well I just want as much action as possible. I trust my team will lead me on the right path and hopefully I’ll be out again a few times before the year is out.”