Joe McGrail moves to 4-0 against Stefan Nicolae in Bolton 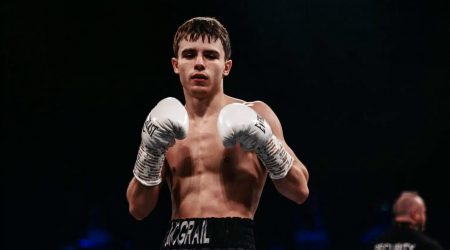 The 19-year-old won a four round contest with Romania’s experienced Stefan Nicolae 40-36 in Barnsley – an opponent McGrail has described as “tricky”.

McGrail, now 4-0 in the paid ranks, was in firm control throughout and troubled his rival in the final round some with eye catching backhands and body shots.

But Nicolae held on until the final bell but McGrail was the clear winner and continues his run since turning professional in December.

“He was a tricky customer, he was very awkward to pin down and to let my shots go on him,” McGrail said.

“He was very unpredictable. I’m happy with it and my defences were on point for most of the fight. But I could’ve used more opportunities to counter his wild swings.

“I’ve been ill in the build-up so I’m half recovering from that. I just had to get on with it. I felt like I was a bit flatter than usual but I’m still happy, I felt I boxed well and I’m going to take the positives from it.”