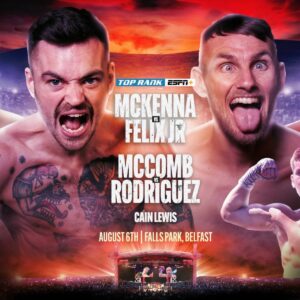 Tyrone McKenna is promising to deliver the same fireworks that he usually provides when he faces Jose Felix for the vacant WBO Intercontinental super-lightweight title on Friday.

‘The Mighty Celt’ was originally due to face Zhankosh Turarov at the event, but a switch of opponent means he now has an extremely dangerous Mexican in front of him, with Felix having 30 knockouts in 39 victories.

The Belfast hero returns to action after competing in the Golden Contract tournament, and he’s set his sights on stealing the show at the Feile and going down as one of his country’s most exciting ever fighters.

McKenna said: “I’m buzzing. Not only is it just the Feile, but it’s basically the first event with crowds in the North of Ireland that people can attend.

“Belfast being a massive boxing city means the place will be rocking. The last Feile was unreal but I think this one will be more special with it basically being Belfast’s first night out after 18 months of lockdown.

“I’ve watched a few videos of my opponent and he’s what you expect, a tough Mexican. He has 30 knockouts which suggests he’s got some serious punching power, so I think it’s going to be a war.

“I’ve entered this full camp with war on my mind and its what I’m going to bring in the fight. I’m prepared to out-Mexican the Mexican. I don’t care if it steals the show but I know I’m going to entertain.

“My goal is to go down as one of Ireland’s most entertaining fighters and to do that I have to fight the hardest fights offered to me.”