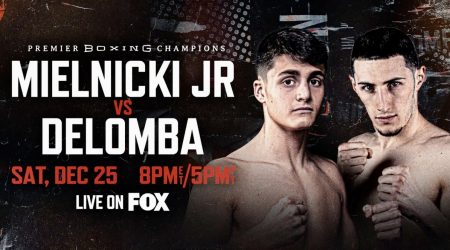 When asked to headline a major, nationally-televised boxing event on Christmas day, Rhode Island’s Nick DeLomba was hesitant at first, so he consulted with the “boss” of the household, his five-year-old son, Nicolas Jr.

“The first thing I did was ask him, ‘Do you mind if daddy fights on Christmas day? Daddy will get you whatever you want,” DeLomba said. “Now he’s telling everyone, ‘My daddy is fighting on FOX!’ It made me feel so much more comfortable.”

With a reassuring thumbs-up from Junior, the 31-year-old DeLomba (16-3, 5 KOs) heads into the biggest fight of his career this weekend at The Prudential Center in New Jersey, where he faces 19-year-old, up-and-coming welterweight prospect and hometown hero Vito Melniecki Jr. (9-1, 6 KOs) on December 25 in the 10-round main event of Premier Boxing Champions’ Christmas showcase on FOX. The live telecast begins at 8 pm ET and also features an eight-round middleweight showdown between undefeated Joey Spencer and veteran Limberth Ponce.

This is a potential life-changing moment for DeLomba, the long-time CES Boxing workhorse and Cranston, RI, native who hopes to lean on his experience and ring savvy against Mielnicki, a raw, but talented, prospect who won four Junior National Golden Gloves championships before turning pro at the age of 17.

Neither fighter enters this bout unblemished. DeLomba, who hasn’t fought since February of 2020, just weeks before the onset of the COVID-19 pandemic, is coming off a loss to future super lightweight star Richardson Hitchins, just the third loss of his career. Mielnicki, meanwhile, is still rebuilding following a majority-decision in his ninth pro fight against James Martin; he last fought in July, knocking out Noah Kidd in the second round of their scheduled eight-round fight on FOX, arguably his best performance as a pro.

While Mielnicki has fought his entire pro career under the intense spotlight of nationally-televised audiences and will no doubt have homefield advantage on Saturday – he’s a product of nearby West Essex High School in North Caldwell, NJ, and generates a huge crowd in the tri-state area – DeLomba is confident his eight-year career and countless peaks and valleys as a pro will carry him to victory this weekend.

“I will lean on my experience this entire fight,” said DeLomba, who has gone the distance in 13 of his 19 fights. “He’s never fought 10 rounds. He hasn’t fought the level of competition I’ve fought. I’m a grown man. He’s still young.

“I’ve been dropped, defeated – suffered terrible cuts – and I still keep coming. He hasn’t been tested like that, but I’m going to test this kid and see what he’s about.”

Being away from his family during the holiday will be difficult to swallow, but DeLomba views it from a big-picture perspective, knowing a win against a top prospect on Christmas day in front of millions of viewers can take his career to the next level.

“The way my family put it, we do the same thing every year on Christmas. We spend time with family, we eat – this year, why not do something great?” DeLomba said.

Since he turned pro with CES in 2013, DeLomba has always marched to the beat of a different drum. He fought six rounds in his debut, whereas most fighters start out in fours, and beat New England rival Jimmy Smith in absolute war. Within months of his first pro loss, a shocking first-round knockout at the hands of Gledwin Ortiz in 2015, he went right back to the lab and took on then unbeaten Massachusetts native Freddy Sanchez, reclaiming his throne with a unanimous-decision win.

Never one to back down from a challenge, DeLomba has campaigned at both super lightweight and welterweight, enjoying most of his success at 140 pounds. He’s dedicated his life to the sport and now has the opportunity to earn his biggest reward this weekend on one of the most celebrated dates of the year – a true Christmas miracle.

“At the end of the day win, lose, or draw, I love what I do,” DeLomba said. “Every bit of this is rewarding to me. To be the main event on this stage on such an amazing day, it’s surreal. I’m looking forward to this opportunity.”