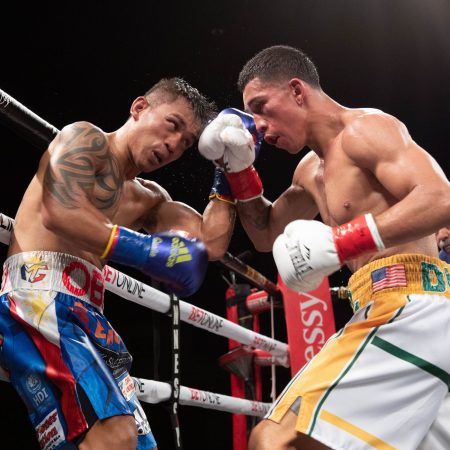 Golden Boy returned to its Coachella Valley home at Fantasy Springs Resort Casino with an exciting night of boxing to a sold-out boisterous crowd. The main event of the night featured an eventful 10-round lightweight fight between Palmdale’s Joel Diaz, Jr. (26-2, 22 KOs) and San Diego’s Mercito “No Mercy” Gesta (33-3-3, 17 KOs).

The first round started off very active as Gesta knocked Diaz, Jr. to the canvas twice, with Diaz, Jr. struggling to maintain his balance. Saved by the bell, Diaz, Jr. recovered and performed excellently in the second round, cornering Gesta and visibly hurting him.

As the fighters grew more comfortable in the ring, they traded blows staying in the pocket, both relentless. The fighters brought the cheering crowd to their feet with their fearless performances as the judges determined their fate. With scores of 93-95, 92-96, and 92-96, the judges ruled in favor of Mercito Gesta, crowning him the victor via unanimous decision. The fight was streamed live on DAZN and on the Golden Boy Boxing YouTube paged, hosted by Beto Duran and Victor Morales.

“I feel energized, knowing I have an upcoming baby that has made me want to go back in the ring,” said Mercito Gesta. “We have been trying for six years, and we are blessed with this new life. I am so happy. When they said that there is ring rust, I don’t think I have that because I have been working hard and staying in shape. Joel Diaz, Jr. is a tough fighter, and winning and having such a great performance is going to open the doors for me in the sport.”

“Mercito is a tough opponent,” said Joel Diaz, Jr. “I was giving him a lot of hard punches, but I couldn’t catch him. There is still a lot that I need to work on, focusing on landing my punches and staying patient. I was going out there looking for the kill, but that’s not always going to happen.”

In the co-main event of the night Jousce “Tito” Gonzalez (12-0-1, 11 KOs) from Glendora, CA, faced an experienced Jairo Lopez (27-15, 17 KOs) of Apodaca, Mexico. The exciting fight featured Lopez hitting the canvas in the second round and Lopez opening a gash on Gonzalez’s right eye with a head butt. The two warriors continued to trade blows in the fourth and the fifth rounds. In the sixth round, as Lopez was stepping back from an attack, the referee called off the fight, awarding Gonzalez the victory via KO at the 2:29 mark of the round.

“I give my performance a six out of ten,” said Jousce Gonzalez. “This is my first fight back, and I know I can do better. He is a very resilient fighter, but I knew I was landing my shots and hurting him. I knew he was taking some punishment, so I wasn’t surprised when the referee waved the fight off. I am just happy to be back in the ring and want to aim to fight big names in the division.”

Local fan favorite Manuel “Manny” Flores (12-0, 9 KOs) of Coachella, CA, took on the experienced Victor Ruiz (23-13, 16 KOs) of Tijuana, Mexico. The scheduled 8-round super bantamweight fight did not go the distance as Flores knocked out Ruiz in the third round, to win via knock out at the 2:21 marker.

“I am so happy to be here and fight in front of all my family and friends,” said Manuel Flores. “I want to thank all the local fans that came out to support; it gives me much more motivation to continue fighting.”

Also, part of the DAZN live stream, Los Cabos, Mexico’s Jan Salvatierra (8-1, 4 KOs) participated in a scheduled 6-round flyweight fight against Ernie Marquez (10-18-2, 3 KOs) from Fort Morgan, CO. In the second round, after a knockdown, Marquez complained of ankle pain, and his corner called off the fight. Salvatierra was awarded the victory via TKO at the 2:26 marker.

“First of all I want to thank God and Golden Boy for the opportunity to fight tonight,” said Jan Salvatierra. “We have had a great training camp, preparing since January for anything that could pop up. We trained to go the distance. I was expecting more from my opponent, hoping that his experience would bring more to the table. But unfortunately he sustained an injury and things happen for a reason. I want to be active for the rest of the year and hopefully fight for a regional title soon.”

In the night’s opening fight, San Diego’s top prospect Jorge Chavez (2-0, 2 KOs) faced Jonathan Tejeda (0-2) of Mexico City in a scheduled 4-round super featherweight fight. Tejeda hit the canvas in the second round, with the referee waving the fight off at the 1:04 marker, awarding Chavez his second victory via knock-out.

“I loved being able to fight at Fantasy Springs; all my friends and family were able to come to see me in a more intimate venue,” said Jorge Chavez. “I am happy I got the victory, but every fight is a learning experience. We will continue to grow, learn, and just get better and better every fight.”

Diaz, Jr. vs. Gesta was a 10-round super lightweight fight presented by Golden Boy. The event was sponsored by Hennessy “Never Stop. Never Settle” and “BetOnline – Your Online Sportsbook Experts.” The fight took place on Thursday, April 21 at Fantasy Springs Resort Casino in Indio, CA, and will be streamed live worldwide on DAZN.