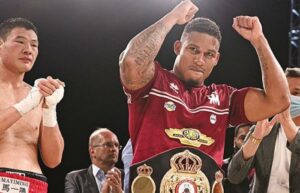 Ryad Merhy retained his World Boxing Association (WBA) Cruiserweight Championship by defeating Zhaoxin Zhang by TKO in the eighth round this Saturday in Brussels, Belgium.

Merhy once again made it clear that he is one of the important fighters in the division and showed his strength as well as his good moves to overcome the Chinese and make the first defense of his title.

The 28-year-old fighter has Belgian nationality although he was born in Ivory Coast. His superiority was seen from the start, his blows were strong on Zhang and he knocked him down in the third round to begin to tip the balance in his favor.

The champion racked up rounds until the eighth, when he landed an impressive left hook that sent Zhang to the canvas in spectacular fashion. Although the Asian got up, the referee determined that he was in no condition to continue and ruled the victory in favor of De Merhy.

Merhy defends his WBA belt against Zhang this Saturday in Belgium 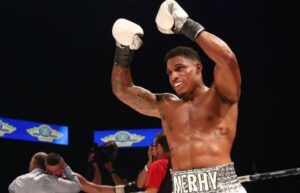 Merhy is 28 years old and a native of Ivory Coast but a citizen of Belgium, where he has lived and pursued his fighting career. He defeated the previously undefeated Imre Szello in his last fight in October 2019.

The pandemic break has forced Merhy to be out of the ring for almost two years and he will now return in the fight a difficult Asian opponent in a big show.

Zhang arrives with little media attention but with great motivation and a lot to win. The Chinese is 25 years old and has a five-fight winning streak.

The weigh-in ceremony will be on Friday, where they must make 200 pounds to be eligible to fight for the belt. Merhy has 29 wins, 1 loss and 24 knockouts to Zhang’s 10 wins, 1 loss and 1 draw on his record.