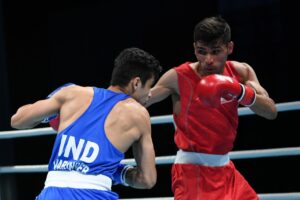 The men’s semi-finals with 20 bouts were held on the fifth competition day at the ASBC Asian Men’s & Women’s Elite Boxing Championships in Dubai, the United Arab Emirates. Uzbekistan became the best nation after it, seven of their boxers advanced to the finals while Kazakhstan performed well also and five of them joined the title contest. Two Iranians advanced to the finals and this is their best performance since the 2005 edition.

Kazakhstan’s Daniyal Sabit claimed the gold medal at the 2019 Youth National Championships which was his first title in his homeland. He attended the 2020 Elite National Championships and surprisingly claimed the title of the light flyweight (49kg) after beating the more experienced former ASBC Asian Champion Temirtas Zhussupov in the final. Sabit, who will turn 19 later this year, received the right to participate in the ASBC Asian Elite Boxing Championships.

Despite the fact that this is his first major championships, Sabit impressed with his amazing technical skills. He had strong motivation to dictate the rhythm against the Philippines’ Mark Lester Durens. The 20-year-old Filipino was competitive only in the first round, therefore, Sabit celebrated a semi-final victory. The 18-year-old Kazakh will be meeting for the gold medal with the defending champion, Uzbekistan’s Nodirjon Mirzakhmedov.

Uzbekistan’s Olympic Games winner and reigning AIBA World Champion in the flyweight (52kg) Shakhobidin Zoirov is a fantastic boxer but he had another top rival in the semi-finals, Kyrgyzstan’s Azat Usenaliev. The Kyrgyz boxer defeated Zoirov in the final of the Amman 2013 ASBC Asian Elite Boxing Championships and they met in several other tournaments in the past. On their re-match, the 28-year-old Uzbek used his long-distance well in the first round and he reached the quick Usenaliev a few times. The Kyrgyz also proved outstanding footwork and found the holes on the Uzbek defense in the second round, therefore, the third was the the key one between them. Zoirov used his power better than his Kyrgyz opponent and eliminated his neighboring rival on their contest. The Uzbek No.1 will be meeting for the gold medal with India’s Amit Panghal which will be the re-match of the final of the 2019 AIBA World Boxing Championships.

“It was my fourth contest against this experienced Kyrgyz boxer and I lost one time eight years ago. We knew each other’s technical skills and style very well. This bout was not an easy one for me, Usenaliev had a very strong will to win this contest, but so did I. Thanks God, I made this contest and I can go for the gold medal of the championships,” commented his success Zoirov.

Following Enkh-Amar Kharkhuu, who advanced to the final of the bantamweight (56kg), the next Mongolian, Erdenebat Tsendbaatar had a world-class battle in the semi-finals of the lightweight (60kg). The defending ASBC Asian Champion and Asian Games winner Mongolian met with one of the biggest future stars of the world, Uzbekistan’s Abdumalik Khalakov in the last four of the category. The Mongolian southpaw used his strength in the first round and tried to keep Khalakov on short distance which worked well. Khalakov, who won all of the big youth championships, used his speed better in the second and his tricky gameplay was successful in that round. The Youth Olympic Games winner Uzbek and the Mongolian were tired in the final round and after the last three minutes, Tsendbaatar won the battle of the day in Dubai.

Uzbekistan’s Elnur Abduraimov was a bronze medallist at the Doha 2015 AIBA World Boxing Championships and the experienced boxer is much stronger physically than ever. The 27-year-old Uzbek met in the semi-finals with Mongolia’s Asian Games silver medallist Chinzorig Baatarsukh who is another veteran star of the light welterweight (64kg). The 30-year-old Mongolian felt the tempo better in the first and second rounds, he found the best attacking angles against Abduraimov and took the lead in the scorecards. Chinzorig controlled the exchanges also in the third round and he became the third Mongolian male finalist in Dubai.

Two Iranians advanced to the finals after 16 years of break

The Iranian national team trained one month in Yangiabad together with the Uzbeks before the start of the ASBC Asian Elite Boxing Championships. The benefit of the training camp is that two of their boxers advanced to the finals of the competition in Dubai which is Iran’s best performance since the 2005 edition. Noureddin Chegini (60kg) and Rohollah Hosseini (+91kg) were the finalists in Ho Chi Min City 16 years ago and their Daniyal Shakhbaksh (60kg) and Meysam Gheslaghi (81kg) have done the same performance in Dubai. The young Iranians won their semi-finals over their Indian and Kyrgyz rivals today remaining their gold medal chances alive.

The ASBC Asian Elite Men’s and Women’s Boxing Championships to be continued after the rest day on the 30th of May. The 10 women’s finals are scheduled on that day and the first champions will be revealed in the next session.