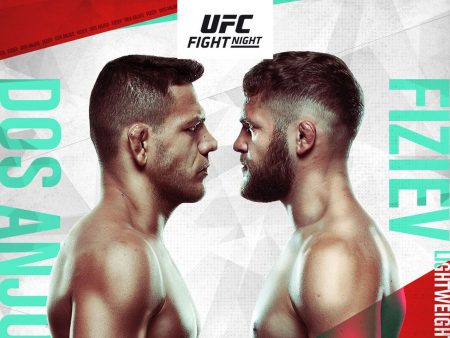 UFC FIGHT NIGHT®: DOS ANJOS vs. FIZIEV will take place this Saturday, July 9 at UFC APEX in Las Vegas. All bouts will be available on ESPN and ESPN Deportes, as well as simulcast in English and Spanish on ESPN+. The main card will begin at 9 p.m. ET / 6 p.m. PT. The prelims kick off at 6 p.m. ET / 3 p.m. PT.

Former champion Dos Anjos (30-13, fighting out of Rio de Janeiro, Brazil) returned to 155 pounds from the welterweight division with a Fight of the Night win over Paul Felder in late 2020. Throughout his UFC run, he has also delivered memorable victories over Nate Diaz and Robbie Lawler, as well as Anthony Pettis, to win the belt in 2015. Dos Anjos now aims to stop Fiziev’s momentum and continue his climb back to a lightweight title shot.

Rising contender Fiziev (11-1, fighting out of Baku, Azerbaijan by way of Phuket, Thailand) has wasted no time dazzling fans with his diverse striking arsenal. Currently riding a five-fight win streak, he holds spectacular wins over Brad Riddell, Bobby Green and Renato Moicano. Fiziev now has his sights set on finishing his first former UFC champion to crack the lightweight top 10.

Borralho (11-1 1NC, fighting out of Sao Paulo, Brazil) earned his spot on the UFC roster with victories over Aaron Jeffery and Jesse Murray on Dana White’s Contender Series last year. The Brazilian Jiu-Jitsu black belt then made a successful UFC debut by earning a hard-fought win against Gadzhi Omargadzhiev in April. Borralho now aims to push his unbeaten streak to 12 bouts by stopping Petrosyan.

Petrosyan (7-1, fighting out of Yerevan, Armenia) impressed on Dana White’s Contender Series with a first-round KO victory over Kaloyan Kolev last October. The talented kickboxer then announced his arrival with an entertaining win against Gregory Rodrigues in February. Petrosyan now intends to become the first fighter to finish Borralho by securing another highlight-reel KO.

Additional bouts on the card include:

Visit the UFC.com for information and content to support your UFC coverage.