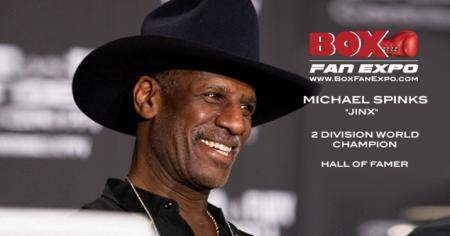 Two-division world champion and Hall of Famer Michael Spinks has confirmed that he will appear at the Sixth Annual Box Fan Expo on Saturday, September 17, 2022, at the Las Vegas Convention Center from 10 a.m. to 5 p.m. The Expo will also coincide with the mega trilogy fight between Canelo Alvarez vs Gennady Golovkin, that will take place later that evening at the T-Mobile Arena.

Spinks will hold a Meet & Greet with his fans at his booth during the fan event held over the Mexican Independence Day weekend.

Spinks will make his second appearance at this years’ Expo and will be signing gloves, photos, personal items and memorabilia. Spinks will also have merchandise on sale at his booth, and fans will also have an opportunity to take pictures with this boxing legend also known as “Jinx.”

As an amateur he won a gold medal in the middleweight division at the 1976 Summer Olympics. Spinks is the brother of former world heavyweight champion, the late Leon Spinks, and uncle of Cory Spinks, a former welterweight and light middleweight champion.

Spinks only defeat in his professional career came to the hands of Mike Tyson on June 27, 1988. The International Boxing Research Organization and BoxRec rank Spinks among the ten greatest light heavyweights of all time.