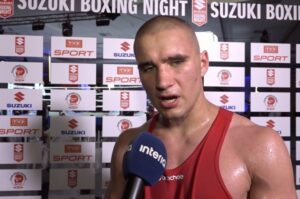 The explosive Cruiserweight is signed to Queensberry Poland and has won both professional fights in style.

Soczynski who hails from Lubin outpointed Piotr Rzyman on his debut last November, and in March knocked out Michael Czykiel inside a round.

Soczynski, won 108 of his 136 amateur bouts, was Polish champion in multiple age groups and captured a Bronze medal in 2016 at the European Junior championships.

He said: “I am excited to be boxing in London. British and Polish fans will like my aggressive style. There is a big Polish community in London and I am sure they will want to support me.

“Hard work is the most important thing and I train so, so hard. I am happy with the chance Mr Warren and Mr Krawczynski have given me.”

“Many Polish fans and boxing journalists expect him to become a World champion and I am in agreement with those.

Hall of Fame promoter Frank Warren says:  “We have made good strides already with Queensberry Poland. My son Francis and Mariusz Krawczynski  are identifying the top young talent.

“I am looking forward to seeing Michal in action. He is a great addition to what is already a quality bill on a huge night for British boxing with Tyson Fury facing Deontay Wilder in the early hours of Sunday morning.”

There is Heavyweight action featuring David Adeleye (6-0, 5 KOs) and Mill Hill’s George Fox (3-0) who makes his Queensberry debut. Both face opponents to be named.