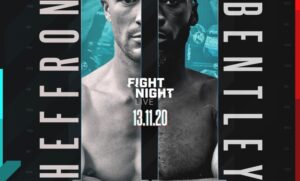 Fight Notes: Even 1st round. 2nd round Bentley caught Heffron then Bentley was on him with now damage to left eye of Heffron. Eye closing. 3rd, Heffron trying, on the front foot but from range Bentley is using a one-two, left-right and targeting the left eye…Bentley takes it. 4th, Heffron still trying, Bentley takes the round. The corner/ref stopped the fight upon the bell ringing to the start of the 5th round for Bentley win.

Fight Notes: Krajevskij very games but a clear Fury round. Krajevskij down via a right uppercut and ref waving the fight off for a 2nd round win for Fury. Time of the stoppage was 2:56.

Fight Notes: Agyarko clearly takes round 1 with some well placed shots, Chapman game. Agyarko takes a closer round 2. close round 3 but Agyarko just taking it. Agyarko trying to unload with Chapman countering…even 4th round. Agyarko takes the 5th round as has settled back down again and is not just uploading. Chapman showing a good jab, using his height and trying to bully Agyarko but Agyarko takes round 6. Agyarko made an opening and unloaded to the point of the ref (Bob Williams) stopping the fight for a Agyarko win at 0:33 of the 7th round.

Fight Notes: Turner clearly takes round 1. Round 2 for Turner. Slower 3rd but another Turner round. 4th for Turner. Round 5 with Newton vocal, taunting Turner…Turner good variety of shots with consistent pressure and clearly taking the round. More of the same with Turner taking round 6.

Fight Notes: Burke takes round 1 on the front foot. Broadbent down in round 2 and ref stopped the fight. Time of the stoppage was 2:32 of the 2nd round for a Burke win. 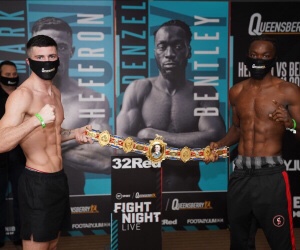