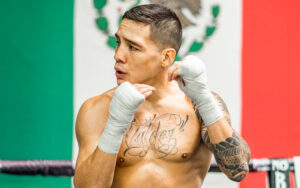 The fight between World Boxing Council super-featherweight champion, Miguel Alacran Berchelt and Oscar Valdez is one of the most anticipated fights and it will land on February 20 in Las Vegas.

“I have always wanted to win the WBC Green and Gold Belt, and now I may have the opportunity. It`ll be a tough fight, but I am confident in my ability and in my team to win,” commented Valdez.

Berchelt, 28, with a record of 37-1 with 33 knockouts, has made six defenses of the title that he won against compatriot Francisco Vargas, in January 2017, and is undoubtedly one of the most accomplished champions of today.

Valdez (28-0, 22 KOs), 29, climbed to the super featherweight division in 2019 after a solid path at 126 pounds. He is coming from defeating Puerto Rican Jayson Velez by knockout in the tenth round.