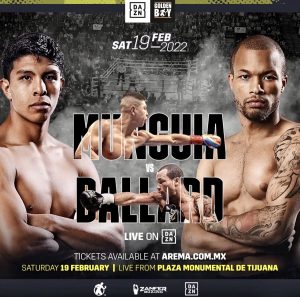 Opening the DAZN broadcasts, undefeated Rafael “El Divino” Espinoza (18-0, 15 KOs) of Guadalajara, Mexico, took on Alie “Demolition Man” Laurel (18-7-1, 11 KOs) of Manila, Philippines. The scheduled 10-round featherweight only lasted a round after Espinoza knocked down Laurel twice in the first round, winning by technical knockout at the 1:30 mark.

Christian Olivo (19-0-1, 7KOs) of Hermosillo, Sonora, Mexico faced Guadalajara’s Miguel Mateos (12-5, 7KOs) in a 6-round featherweight fight. Both fighters were willing participants as they both took turns throwing combination at each other to the applause and cheers of the crowd. The fight went the distance with Olivo winning the fight via unanimous decision with scores of 60-54 from all three judges.

Also, part of the non-broadcasted fight card Jorge “Chino” Garcia (23-3, 19 KOs) of Los Mochis, Mexico, defeated Sinaloa’s Jesus “Dengue” Nunez Rodriguez (19-9-2, 13 KOs) via a debilitating body shot in the third round. The fight was originally scheduled to be a an 8-round super welterweight fight

In the second fight of the night the undefeated Evan Sanchez (10-0, 6 KOs) of Parlier, California, defeated Abraham “Pitbull” Juarez (19-9, 8 KOs) of Mexico City, Mexico. The scheduled 6-round super welterweight event went the distance with Sanchez declared the victor via unanimous decision.

Opening up the night of boxing at Plaza Monumental de Playas, Monterrey’s Arely “Ametralladora” Mucino (31-3-2, 11KOs) took on Marisol Sanchez (12-5, 5 KOs) of Chiapas, Mexico, in an scheduled 8-round flyweight fight. Muncino charged at Sanchez early, hurting her in the second round and winning in the second round by technical knockout.