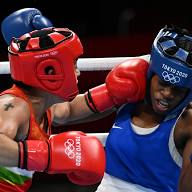 On the morning of July 25, India’s top female boxing star, Mary Kom, made her debut in Tokyo, and, at the age of 38, she continues to make history.

In the Kokugikan arena, Kom, who has been fighting for almost 20 years, scored a great technical superiority over the Dominican opponent Miguelina Hernandez, 15 years younger than the Indian fighter, in the flyweight category (48-51kg). In the round of 16, Mary Kom won 4-1 and will now prepare to face 32-year-old Colombian Ingrit Valencia, the Rio 2016 Olympic medalist.

Kom has told the press that the motivation to win Olympic gold is what fuels her strength. After reaching six world titles in elite women’s amateur boxing, the Indian representative is aiming for the ultimate sporting dream before hanging up her gloves.

The clash of one of the two most emblematic boxers of the division; Valencia vs. Kom will take place next Thursday.