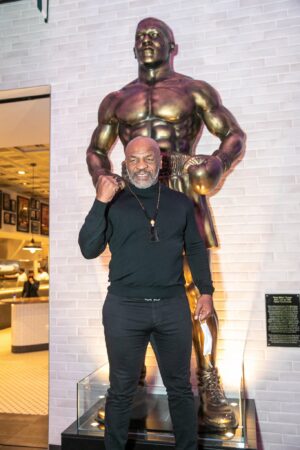 Legendary heavyweight champion Mike Tyson has been honoured for his spectacular and magnificent career, with an impressive bronze statue in Las Vegas, Nevada, by the sculptor Richie Palmer.

Colossus Mike posed next to the three-meter monument, which has superbly captured the detail of his face, including his characteristic tattoo, and his impeccable iron like physique, which he imposed upon his rivals in every match.

“I have known Richie since my teens in New York and we have always been very close.  I am very grateful for this recognition. I am very touched right now,” Tyson commented.

One of the greatest heavyweights in history, he was born in New York in 1966 under the name Michael Gerard Tyson. His career spanning a sphere of different eras and tastes in history. Tyson has not only been a great boxer, but an inspiration and an icon.

Tyson won the world title twice in the 1980s. He was the youngest champion in history to win the heavyweight title, when on November 22, 1986, he defeated Trevor Berbick, at just 20 years old, 4 months and 22 days.