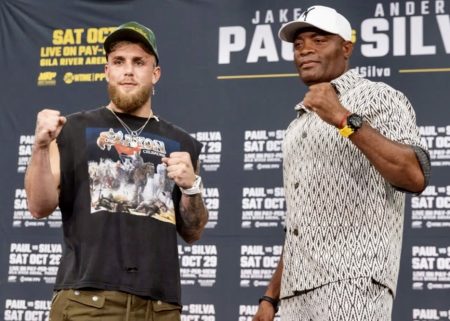 One of boxing’s most exciting prospects, Ashton “H20” Sylve and two of its most intriguing newcomers, Chris Avila and Mikhail “Doctor Mike” Varshavski highlight the SHOWTIME PPV undercard on Saturday, October 29 (9 p.m. ET/6 p.m. PT) headlined by Jake “The Problem Child” Paul vs. UFC legend Anderson “The Spider” Silva at formerly Gila River Arena in Glendale, Ariz., just outside Phoenix. Tickets are on sale now and can be purchased at ticketmaster.com.

Teenage sensation Ashton Sylve (7-0, 7 KOs) will increase his level of competition and put his knockout streak on the line against durable Braulio Rodriguez (20-4, 17 KOs) of the Dominican Republic in an eight-round lightweight bout contested at 133 pounds. Avila, a disciple of UFC superstar Nate Diaz, will look to make a statement against “Dr. Mike” Varshavski, a board-certified family physician and social media influencer with nearly 23 million followers. Their four-round cruiserweight bout is contracted at 185 pounds.

The first prospect signed by MVP, Sylve of Long Beach, Calif., has stopped all his opponents in four rounds or less, demonstrating hair-trigger reflexes. The 18-year-old recently knocked out Giovanni Gutierrez in the first round of his MVP debut at lightweight in May. He fought three times in 2021 and twice thus far in 2022. A gifted amateur who turned pro at 16 with over 100 wins and 10 national titles to his credit, Sylve first rose to fame as an eight-year-old when a training video made by his father, Ivan, went viral, leading to an invite to Floyd Mayweather’s storied gym in Las Vegas.

“This is a dream come true and I’m really excited for the opportunity to put on a spectacular performance on SHOWTIME Pay-Per-View,” Sylve said. “This is my toughest opponent yet and I’ve been training hard. I’m looking forward to introducing the world to H2O on October 29th.”

Sylve is facing an experienced opponent in Rodriguez, who has scored knockouts in all but three of his wins thanks to an aggressive, swing for the fences style. When he’s lost, it has come against top-flight opposition. Rodriguez has shared the ring with lightweight contender Ryan Garcia and title challenger Christopher Diaz. He dropped a split decision to then undefeated prospect Alberto Mercado and a unanimous decision to then unbeaten Carlos Diaz, the first blemish of his career after scoring 15-straight knockouts to start his pro campaign.

A veteran of both the UFC and Bellator, Chris Avila (1-1 as a boxer) has made the walk for 17 professional fights and has never been stopped or hurt during his time in the cage and ring. Making his second appearance on a Jake Paul card, the 28-year-old Stockton, Calif., native is an everyday training partner of Nate Diaz, and signature member of the Nick Diaz Army. As was the case in Tampa, Fla., when Avila beat Anthony Taylor in a super middleweight boxing match last December, Diaz and more than 40 members of the Nick Diaz Army will once again be present for Avila when he takes on “Dr. Mike.” With a reputation as an aggressive fighter, Avila’s calling card overhand right landed him two first round KOs in 2021 in MMA fights, and a 3-0 combat sports record for the year.

“Hmmmm, let’s see. I am giving him a height advantage, a reach advantage and a medical degree advantage,” Avila said. “It’s whatever though. If he wants to go to boxing fantasy camp, then I’m glad to give him the lesson he wants. A real fight against a real fighter who is not here to play games or clout chase for Instagram.”

t’s a good bet Avila has never faced anyone with a bedside manner like “Dr. Mike” Varshavski. Voted “Sexiest Doctor Alive” by People Magazine, the 6-3 Varshavski will attempt to prescribe a steady diet of right hands to Avila in his pro boxing debut. A fitness nut with over 10 million subscribers to his YouTube channel, “Dr. Mike” bloodied and battered YouTube personality Ian “iDubbbz” Washburn this past May in the main event of Creator Clash to walk away with a victory in the exhibition bout. If “Dr. Mike” puts forth a similar effort on October 29, the prognosis could be grim for Avila. “Dr. Mike” donated his entire purse in May to help relief efforts in Ukraine and plans to donate his purse on October 29 to a Boys & Girls Club of NYC.

“As a practicing physician, I’ve taken an oath to ‘do no harm,’ but when those ‘exam’ gloves come off and the boxing gloves slide on, all bets are off,” Dr. Varshavski said. “With one win under my belt, I’m hungry to add more. And this pro fight with Chris Avila could be just what the doctor ordered.”

The Paul vs. Silva event is co-produced by SHOWTIME PPV and Most Valuable Promotions (MVP), a company founded by Paul and Nakisa Bidarian. Holden Boxing will be the licensed promoter of the event, and Paul and Bidarian will serve as executive producers for the event. The pay-per-view telecast is produced and distributed by SHOWTIME PPV.