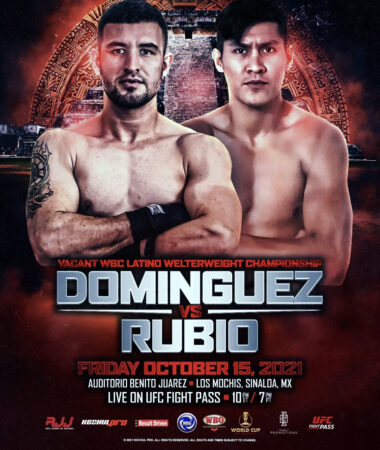 Undefeated Mexican welterweight Santiago “Somer” Dominguez (25-0, 19 KOs) returned to the ring after a 10-month idle stretch, but the heavy-handed prospect made up for lost time, stopping Jesus “Chino” Antonio Rubio (13-5-1, 7 KOs) midway through the fifth round of the main event, when Rubio suddenly turned his back to the action to halt their fight.

Dominguez, a former NABF Welterweight Champion, was out of the ring for  personal reasons. His long-awaited return resulted in him capturing another title belt, the vacant World Boxing Council (WBC) Latino welterweight championship.

Rubio was coming off an unsuccessful challenge for the vacant WBA Interim World Super Lightweight Championship, in which he lost a 12-round decision to Alberto Puello (18-0) Prior to that fight, Rubio won an 8-round decision over 21-3 Sonny Fredickson.

Former WBC Youth Silver Featherweight Champion Jose “El Sugar” Eduardo Nunez (22-1, 22 KOs) won his 12th straight fight in the co-featured event, knocking out Osvaldo “Catotas” Maldonado (10-2, 5 KOs) in the ninth round. Nunez, who is a perfect 22 knockouts in 22 pro victories, was one of the best kept secrets in boxing, but the added exposure he received from fighting on UFC FIGHT PASS platform will undoubtedly make him much better known, particularly in the United States. with 21 knockouts in 21 victories, however,

Featherweight Nazrio Castro (6-3, 3 Kos) took a 6-round decision from Enrique Mejia Morales (3-2), while super welterweight Valerie Bustamante won a 4-round decision versus Milagros Gabriela Diaz in a fight between pro-debuting Mexican women.