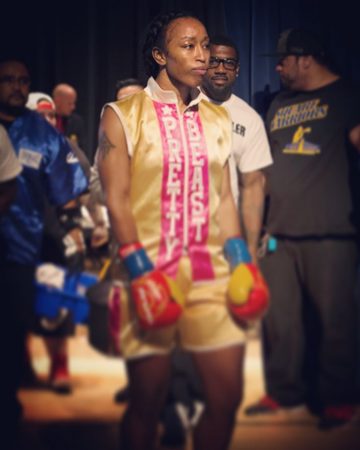 In a resounding victory on Thursday, December 2, the former World Boxing Association interim super welterweight champion., Raquel “Pretty Beast” Miller returned to the ring against Sonya Dreiling at The Hangar in Costa Mesa, California, United States. After the six rounds agreed in the middleweight division, Miller won by unanimous decision on the scorecards.

She grew up in downtown Hunter’s Point, but later moved with her family to the San Francisco Bay Area. During her childhood she was part of the occasional street fight, her temperament and the self-confidence instilled in her by her mother helped forge a strong character. However, boxing was not on the map during childhood. Stepping up to fight with gloves was something that came as an adult.

While working at a law firm she decided to take up boxing with the idea of just doing one fight and losing weight: she did. She did lose considerable weight and settled in at middleweight and super welterweight. She dreamed of the Olympics at the age of 25, 2010, after making a few amateur appearances. Many told her it would be impossible.

By 2012 she made it to the US national team as an alternate for the London Olympics when the sport’s top event was inaugurating women’s participation in boxing. She accumulated medals in state, national and for 2016 she decided to make the leap to professionals; she debuted with a technical knockout at the fourteenth minute of the first round.

While continuing in the formal work of the law firm, she began to work as a personal trainer, trained and began the construction of that cherished dream of being consecrated as world champion: in November 2019, in Canada, she defeated by points unanimously the Mexican Alma Ibarra and won the WBA 154 interim belt…

At present, the “Pretty Beast” created her own clothing brand, is co-founder of a non-profit organization called Ladies in Power. On Thursday, she increased her unblemished record to 11 wins with 4 knockouts and is ranked No. 4 in the pioneer organization’s world bantamweight rankings with the aim of fighting for the division’s full title.