Marco Cota to be showcased Sept. 16 on “Canela Boxeo” card 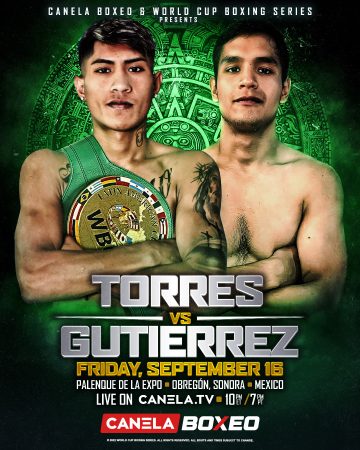 Undefeated Mexican lightweight prospects Luis “Koreano” Torres (16-0, 10 KOs), rated No. 20 by the World Boxing Council (WBC), and Cesar “Torito” Gutierrez (14-0-2, 5 KOs) will throw-down September 16 in the 10-round main event on another installment of the popular “Canela Boxeo” series, presented by CANELA BOXEO, from Expo Palenque in Ciudad Obregon, Sonora, Mexico.

The 20-year-old Torres, fighting at home out of Ciudad Obregon, is a former WBC Youth Silver Champion and reigning WBC Latino lightweight champion. His fight versus Gutierrez is a non-title bout.

“It always feels good to fight at home,” Torres said. “I have so many supporters there and I can’t wait to perform in front of them on Mexican Independence Day. I know that my opponent is very aggressive, strong and that he loves to come forward. He will definitely test me. We are both undefeated and this is exactly what our people want to see.

“This will be a fight! It can only be a real fight when you have two proud Mexicans fighting each other on this special day. I predict an exciting fight, which will continue to make my people, team, and family proud of me.”

Torres understands the potential implications associated with this fight, especially as he moves from prospect to contender, also valuing the added exposure he’ll receive fighting on CANELA.TV..

“I’m already ranked at number 20 by the WBC,” Torres noted, “I feel that after my next few fights I’ll be ready for the top 15. I’m only 20 and in no rush. Fighting on CANELA TV is such a blessing. Not only will my fight be seen in my country, but all Latinos can watch it for free. It doesn’t get any better than that!”

Torres was the first boxer signed by first-year promoter WCBS and he couldn’t be happier by the way his career is being guided.

“Being with the World Cup Boxing Series is the best move we could have made,” Torres concluded. “Terry and Guy treat us like family not fighters. Every WCBS fighter tries to help each other. We are all very close”

Highly touted Mexican prospect Marco Cota (8-0, 6 KOs) and Kevin Piedrahita (5-1, 5 KOs), of Colombia, are matched in an 8-round Special Lightweight Attraction. Cota was a standout amateur who compiled a 146-4 record, while Piedrahita is dangerous having won all of his 5 pro fights by knockout.

Additional fights will soon be announced. 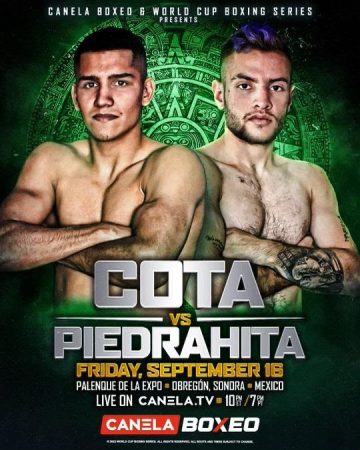 Another rising Mexican lightweight prospect, Marco Cota (8-0, 6 KOs), will be fighting in his first scheduled 8-round bout on September 16 in the next installment of the entertaining “Canela Boxeo” series, presented by CANELA BOXEO.

“We are working on my cardio,” Cota noted about additional work to be prepared to fight 8 rounds. “We are focused on a lot of cardio and strength conditioning to get to where I can fight 8 rounds at a good pace.

“I feel that fighting on ‘Canela Boxeo’ is a very good platform and many people will watch my fight. It will project my future career a lot and many people from other parts of the world will begin to know me.”

“Canela Boxeo” is streamed live and for FREE on the third Friday night of every month, now starting at 10 p.m. ET / 7 p.m. PT, from various venues in Mexico. The Sept. 16th card will emanate from Expo Palenque in Ciudad Obregon, not too far from Cota’s home in Empalme, Sonora.

“I’ve been in this business for more than 20 years,” Taylor said, “and Marco Cota is one of the best prospects I’ve ever seen. On September 16th, fans are going to see a real battle in every sense of the word. Cota versus Piedrahita can only be seen LIVE and FREE on CANELA.TV. All that’s needed to watch is to download the FREE APP.”

Cota is matched against Kevin Piedrahita (5-1, 5 KOs), of Colombia, in the Featured Bout.

“The little I know is that he is very good,” Cota said about his opponent. “He is a strong fighter who likes to clash and exchange blows toe-to-toe.”

A 5-time Sonora State Champion, Cota was 146-4 as an amateur, highlighted by his bronze-medal performance at the 2015 National Tournament. Cota’s dream was to represent Mexico in the Olympics, but the opportunity never came.

“The truth is that they never took me into account,” Cota explained. “It was a dream for me to represent Mexico in the Olympic Games. I had a great amateur career and always stood out at the National level. In Mexico, though, the best are not always selected. It’s a complicated process.”

A self-described complete fighter, Cota has a fan-friendly style, effectively boxing from both long and short distances, adapting well in the ring when needed, and possessing solid power in both hands. His short-term goal is the become the No.1 rated lightweight in Mexico, eventually developing into a world champion.

He is a proud member of the WCBS family. “I feel very good,” Cota remarked about his promoter. “I have the necessary activity for my career and that motivates me a lot. I know that I’m on the best team in Mexico. The treatment WCBS gives its fighters is very special.”

Cota, of course, predicts victory against Piedrahita, saying: “I expect a brawl. My team has studied my opponent and the best thing is to box him by hitting bottom-to-top with my distance. Let’s see. It is going to be a very competitive fight and we are going to come out with our hands up.”

The Sept. 16th headliner is another undefeated 20-year-old Mexican prospect, Luis “Koreano” Torres (16-0, 10 KOs), who  will defend his World Boxing Council (WBC) lightweight title at home Ciudad Obregon, versus an opponent to be determined in the 10-round main event. Torres is a former WBC Youth Silver Champion who won his WBC Latino lightweight belt in his last fight by way of a 10-round unanimous decision from Diego Andrade Chavez (14-6-2). 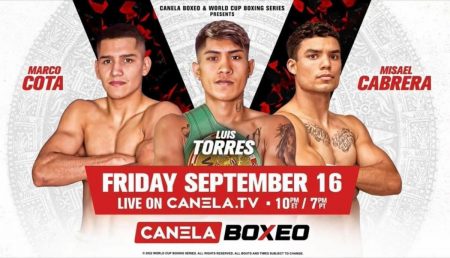 “Canela Boxeo” is streamed live and for FREE from Mexico on the third Friday night of every month, starting at 10 p.m. ET / 7 p.m. PT. The September 16th card will be held in Expo Palenque in Ciudad Sonora.

The gifted Torres grew up in one of the roughest neighborhoods in Obregon, Colonia Cajeme, turning pro when he was only 16. A former WBC Youth Silver Champion, the 20-year-old Torres captured his WBC Latino lightweight crown in his last fight, taking a 10-round unanimous decision from Diego Andrade Chavez (14-6-2) in Ciudad Obregon.

Torres will face a challenger to be determined in the 10-round main event.

“September 16th will be th most stacked card we have done on CANALA TV,” Taylor said. “Torres is quickly becoming one of the most talked about names in Mexico since he won the WBC Latino Championship. Torres and the new CANELA BOXEO is can’t miss TV.”

Also scheduled to be in action is another pair of talented Mexican lightweights, undefeated Marco Cota Moreno (8-0, 6 KOs) in his first scheduled 8-round bout, and Misael “Pichon” Urias (12-1, 9 KOs) in an 8-rounder.

The 20-year-old Moreno was 146-4 as an amateur, highlighted by a bronze-medal performance at the 2015 National Tournament, in addition to winning a gold medal as National Champion. He was also a 5-time Sonora State Champion.

Urias, 23, lost for the first time as a pro in his last fight, on the road in Montreal, to Mithieu Germain (20-2-1) by way of a competitive 10-round decision this past June 2nd.

More details about this potentially explosive card will soon be announced.