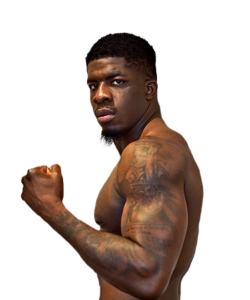 David Adeleye would be forgiven for doing a double take on his ring walk when he sees several thousand fans this weekend.

When Adeleye (6-0, 5 KOs) boxes at SSE Arena, Wembley on Saturday (July 24) it will be the first time he has fought in front of a live crowd since his professional debut in December 2019.

Excited Adeleye, 24, said: “It’s going to be electric fighting in front of a few thousand fans. I am going to thrive off the atmosphere.

“I am not used to a crowd anyway. When I was an amateur I was always last on when people were going home, so the behind closed doors shows were like being back in the amateurs in that respect.

“Now, I have to get used to fighting in front of crowd and I am going to love every minute of it.

“I will go out there enjoy it, have fun. A lot of fighters don’t enjoy big nights. They look back on it when they retire and regret not enjoying these big Wembley nights.

“I heard I was the busiest boxer in Britain when there were no fans in. Credit to Frank Warren. He kept me active and I am grateful.

“I would love to be 10-0 by the end of the year. Then, we can start looking at some of these boys and start fighting for some titles.”

When he boxed before fans on his debut, Dmitrij Kalinovskij was blown away inside a round and Adeleye predict’s an explosive performance, live on BT Sport this weekend.

Kamil Sokolowski took him the distance in his last fight and Adeleye brushed off unfair criticism after his six round points win against a solid opponent.

Adeleye who is trained by Frank Greaves added: “I am looking at getting back to knockout ways. That is in my nature.

“My brother was at the last fight and he said afterwards that it was the worst he has seen me perform amateur or professional.

“There were some underlying problems, but that is no excuse. This week, I will show my skillset and go from there.

“A lot of things have gone better. We hit a few brick walls but we got through it. It was tough getting sparring partners as the country was locked, but we got the good work in and I’m raring to go.

“Heavyweights knock someone out and people moan, ‘You aren’t learning,’ or go the distance, and critics say, ‘You’re no good.’

“Heavyweights get ridiculed, but I do not let it get to me.” 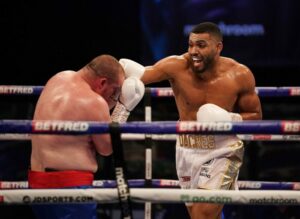 The former Team GB standout, who has shared sparring with the likes of Unified Heavyweight World Champion Anthony Joshua and European Champion Joe Joyce, completely dominated Manev, earning a 60-54 decision from the referee.

“It was good to get six rounds under my belt,” Dacres told Matchroom. “I know a lot of people like to get the big Heavyweights that get them out of there in one round, but you don’t learn much from that. I got to show my skills. I didn’t just go for all power. I’ve got plenty more in the tank, so it was good to get the rounds in.

“I showed my hand speed at times. I showed I can box. I didn’t rush it. I’ve varied the power up. It’s all building up. We’re training to be a twelve-round fighter, not just a one or two round knockout artist. You don’t gain much from getting someone that is going to fall over after a round. Six tough rounds, I got to go through the gears, show a bit of what I’m about and learn a little bit as well.

“I was pretty relaxed to be honest. I’ve had plenty of amateur fights. I know that I prepared very hard. It felt good to get in there. Hard work is at the route of it all. If you put that hard work and dedication in, the sky is the limit. I’ll keep putting my head down in the gym and performing in the ring.” 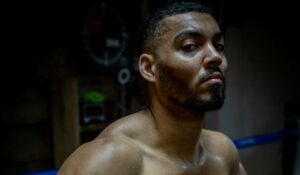 Birmingham Heavyweight debutant Solomon Dacres is promising an explosive performance when he takes on Mladen Manev over six rounds at the AO Arena, Manchester this Saturday May 15, live on Sky Sports in the UK and on DAZN in the US and more than 200 countries and territories.

The 6ft 5ins 27-year-old, who is managed by Adam Morallee and Sam Jones of S-JAM Boxing, has been a regular sparring partner of Unified Heavyweight World Champion Anthony Joshua, and shared sparring with Joe Joyce and Daniel Dubois ahead of their November clash.

In an impressive stint in the amateurs, Dacres won gold in the 2017 National Championships, before joining the Team GB squad in April 2017 and representing the British Lionhearts in the World Series of Boxing during a successful spell in Sheffield.

Trained by Max McCracken alongside former WBA Super-Flyweight World Champion Kal Yafai and European Super-Bantamweight Champion Gamal Yafai – who puts his Title on the line against Jason Cunningham on the same bill – ‘The Real Deal’ plans on using his brute power and strength to make a mark in the thriving domestic Heavyweight scene.

“I’m looking forward to some solid performances and hopefully some big knockouts,” said Dacres. “I’m in the fight game to have good fights at the end of the day. The main thing for me is progression. I need to make sure that I’m learning and improving with each fight. I want to look good as well.

“You’ve got to stay grounded. When you’re sparring guys like Joshua who’s a unified World Champion, Joyce and Dubois, they’re having big high-profile fights. You’re sparring with them and you haven’t even had your pro debut. You’re rubbing shoulders with guys that are at that top level and you’re thinking, ‘that’s where I want to get to’. I want to do the best that I can. Seeing that firsthand gives you that hunger to get there.

“I want to make a statement when I turn over and put on a good performance. I’m not messing around in the Heavyweight division. You want to put the guys out and move onto the next one. That’s how it’s going to be really. You’ve got to put your head down and work very hard. When you get to the top of the Heavyweight division, you’re there for a reason. The rewards are huge, but you’ve got to put the work in.

“I’m coming to make my mark on the Heavyweight division. I’m an educated boxer. Being from the Team GB squad, I can box. I can move a bit on the backfoot, but I like going on the front foot. I will look to go forwards, be explosive and let my hands go. I’m looking for an explosive fight and an explosive finish.”