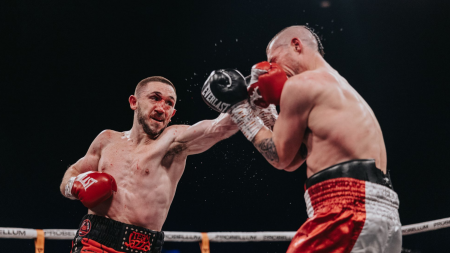 Dickens was back in action after losing last summer’s world title fight with Kid Galahad but delivered a statement of intent by landing a crunching uppercut on the former European champion that sent him to the canvas in the fifth round.

Gago failed to beat the referee’s count and with eight seconds left in the session, the contest was waved off.

Dickens used his moment in the spotlight to make it clear he wants a big fight next, saying: “The next step for me is a big world title eliminator, if not a world title.

“I need a world title next.  It can be Leigh Wood or Josh Warrington, but I would prefer Leigh Wood, who I have beaten before.

“It is hard to see another man with your world title.”

Sam Maxwell’s IBO world super-lightweight dream ended in the ninth round of a thrilling battle with Mexico’s Alejandro Meneses.

Maxwell was dropped in round four but continued to return fire in a back-and-forth affair that will rank as one of the fights of the year.

The Liverpool man was floored heavily again in the ninth and though he got back to his feet, Meneses swarmed Maxwell and forced referee Howard Foster to step in at 2:39 of the round.

Referee Steve Gray stepped in after 1:34 of the session and Fielding says he feels refreshed for having waited to get back in the ring following his 2018 defeat to Saul ‘Canelo’ Alvarez.

Fielding, now 30-2 after a three-fight winning streak, said: “I had never retired; I was just sitting back with the pandemic and was concentrating on my family and kids.

“But it’s good to be back fighting and the break has done me the world of good, I’ve been boxing since the age of nine without any break.”