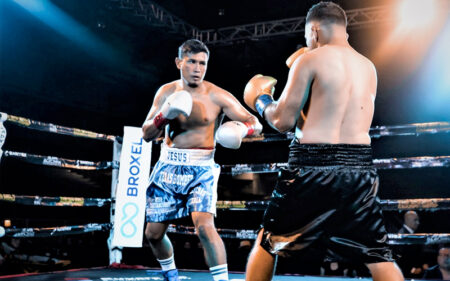 From the Mesquite Rodeo, the second day of the national tournament “The Big Belt Championship” which presents The Boxing Showcase with the support of the WBC, and which was broadcast on WBC VIVE TV.

In what was the best fight of the night, the Texan Fernando “Kid” Vázquez debuted brilliantly in the professional field by defeating the Mexican Moisés Sixto Gómez by unanimous decision (40-36 of the 3 judges) and thus get his ticket to the semi-final round at 118 pounds.

In the 4-round main event of the night at a contract weight of 162 pounds, Texan Mark Vázquez defeated Mexican Ulises Jiménez with a crunching left hook to the liver in just 34 seconds of the first round.

The “Catracho de Oro”, Merin Zalazar, made his spectacular debut on the pay field by knocking out his compatriot Jorge Luis “Chele” Munguía at 34 seconds of the second round, in a fight agreed to 4 rounds at 160 pounds.

While, in the first of the night, Omar Urieta won by TKO in the 1.38 of the first round in a bout agreed at 135 pounds.