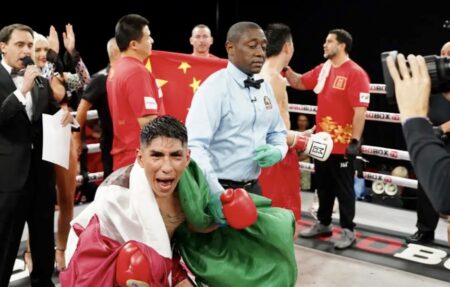 On Friday, October 7 in the main event on ProBox TV, Former World Champion Can “Monster” Xu lost a split decision in his ring return against Brandon “Leoncito” Benitez. The scores were 96-94, 96-94 for Benitez and 97-93 for Xu.

“On paper it’s an upset but the scoring, for me, the right guy won the fight,” said Paulie Malignaggi from ringside. “Xu can fight at a high level and Benitez proved tonight that he can fight at a high level. In the latter half of the fight Benitez was starting the exchanges and finishing the exchanges. But Xu stayed in his face the whole time. That was a good, entertaining fight and I wouldn’t mind seeing it again.”

Roy Jones Jr followed up with: “Xu cameo out on the attack frequently landing the jab but then by round 4 Benitez began countering with combinations. Xu was landing a nice overhand right but didn’t throw it enough and Benitez was landing about 6 shots to every one of Xu’s.”

In the co-featured bout, Cesar “Rainman” Francis KO’d Francisco “Roca” Armenta with an uppercut in round two.

Francis rocked Armenta in the opening seconds of round two then landed a right uppercut at 2:39. Armenta hit the canvas and Roy Jones Jr stated: “Armenta is out cold.” Armenta landed flat on his back, the referee sent Francis to the neutral corner then knelt over Armenta and waved the fight off at 2:31.

“It was a beautiful performance,” said Francis following the KO. “I worked hard. My corner made it a tough training camp and listen, I got the knockout baby. People don’t realize I have a lot of experience. I have been in the game of boxing my whole life since I was eight. This is incredible. You have the 140 lb. “rain man” right here and ProBox TV has a great promotion, and they have a great fighter right here.”

As is customary on ProBox TV, “The Big Four,” comprising of Roy Jones Jr, Juan Manuel Marquez, Paulie Malignaggi and Antonio Tarver, will called the fights from ringside. Michael Goldberg handled blow-by-blow, and Claudia Trejos was the ringside reporter and post-fight interviewer.

It is $1.99 per month for a ProBox TV subscription.

ProBox TV was originally founded by Roy Jones Jr., Juan Manuel Marquez, Paulie Malignaggi, Antonio Tarver and CEO Garry Jonas. Miguel Cotto recently joined the group. In 2023 there will be one fight card per month streamed on ProBox TV in each of the USA, Puerto Rico (Cotto Promotions) and Mexico (Marquez Promotions).