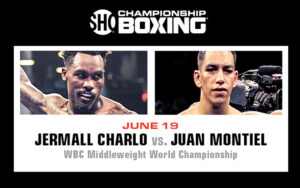 Macías Montiel will realize his dream of contesting the Green and Gold WBC title on June 19, when they clash.

The great World Championship opportunity has been presented to the relative of Fernando “Kochulito” Montiel, for hard won glory.

“The work has paid off, I think it is the dream of every boxer, to fight for the world title, but my time has come. I just need to fulfill my dream. I am doing my part, which is to train and take care of myself, sleep well, rest, I am fulfilling my part, and God will know what will happen, but I feel very confident, very strong to beat Charlo “, said Juan in an interview with the website “Línea Directa.”

Juan Macías reiterated that it is hard to be away from home, without his family, although he`s accompanied by his two uncles who are members of the Kochul Gym team, namely Eduardo and Pedro Montiel.

Macías Montiel (33-4-2, 32 ko’s) will go up to the ring in the main fight of the card against Texan Jermall Charlo, undefeated in 31 fights with 22 knockouts. Jermall is middleweight champion of the World Boxing Council and one of the most outstanding fighters of today.

The fight, which will take place at a venue to be designated in the United States, will be broadcast on Showtime and is presented by PBC.