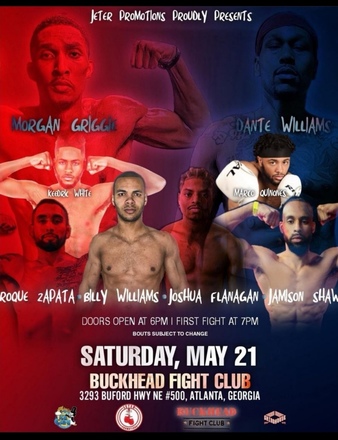 Jeter Promotions made a strong debut in Atlanta with a terrific nine-bout card in front of a boisterous standing room only crowd at Buckhead Fight Club.

In the main event, Morgan Griggie remained undefeated with a four-round majority decision over Luis Pena.  It was a competitive fight that saw Grigge win by scores of 39-37 twice and 38-38.

Jamison Shaw (2-0-1) ran through Marquez Greer in a junior middleweight bout by scoring a Technical Knockout at 1:52 of round one.

Marco Quinones (2-0) stopped Joe Gibson in round one of their junior welterweight bout. The time was 2:40.

Keedric White (2-0_ blew out Ginno Montoya in the opening round of a lightweight contest. The time was 2:35.

Dante Williams (2-0) dropped Justin Richwine twice en-route to a second round stoppage in a heavyweight bout. The time of the stoppage was 2:47.

Joshua Flanagan made a successful pro debut with a second round stoppage over Devante Stevenson in a lightweight bout. Flanagan dropped Stevenson twice before the fight was stopped at 2:43.

In a battle of pro debuting heavyweights, Billy Williams won a four-round unanimous decision over Jeremiah Cotton. Williams dropped Cotton in round two. Williams won by scores of 40-35 twice and 39-36.

In a close fight, Nicky Vittone had to recover from a first round knockdown to win a unanimous decision over Raymond Chacon in a super lightweight bout. The close fight saw Vittone win by scores of 58-55 and 57-56 twice.

Steve Moore dropped Matthew Knauss three times, but Knauss was able to last the distance in their super lightweight contest that saw Moore win by scores of 40-33 twice and 39-34.

Jeter Promotions looks to return to Atlanta later this summer.

Jeter Promotions is made up by former middleweight contender Tony Jeter and his wife Christen. The matchmaker for the show was Xavier Tolliver.