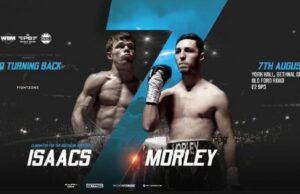 In front of the Fightzone TV cameras, the pair will square off in an eliminator for the Southern Area Welterweight Championship, and the similarities between the duo are uncanny.

Both are undefeated at 6-0, aged 24, and they both turned pro in 2018. They have each boxed a total of 26 professional rounds, and they both have a win over common opponent, Naeem Ali. And, with the exception of Isaacs in his second fight, when they face each other it will be the first time either has boxed an opponent with a winning record.

Ahead of the dust up, Morley – who also doubles as a PT Instructor – is predicting a terrific, all-action bout and is confident he will come out on top.

“I don’t know him personally, though I’ve known of him for a long time from the amateurs,” explained Morley, who won 18 of 26 bouts in the unpaid code. “Going back to when we were 14 we were boxing the same opponents.

“I know a lot about him, and have got a lot of respect, especially for his boxing. He’s a dangerous fighter, is strong, always brings it and is going to be fit. I’m expecting a tough fight, for him to come forward and put pressure on me. That suits me though, it will give me opportunities, and I’ve been pushing myself in training to the absolute max. The last eight weeks has all been about this fight, absolute tunnel vision because the easiest way to get beat is to take your eye off the ball.

“I can punch, though my record doesn’t suggest that. I’ve also been sparring top level fighters, and you can’t just walk straight in on them, so I’ve worked on my boxing and feel pretty well rounded. He’s game and I’m game so it’ll 100 per cent be a good one to watch. I ‘ve got a fan friendly style, and he’s the same. I’ve sold plenty of tickets, he’s a popular boy, it’ll be a great atmosphere and I’m really looking forward to it.

“Fightzone is brilliant, being able to watch it on your phone anywhere is great. What I have seen has been absolute quality, top class production. I’m really excited about headlining the show. It’s going to be a good fight and will bring the best out of me.”

Mo Prior, who is promoting in association with Fight Academy, said: “It’s great to be putting a show on again after such a terrible time with COVID. The York Hall is one of the best venues in the country for boxing and there have been so many brilliant nights there over the years, and this will be another. Both Dan and Louis are Southeast boys and the atmosphere is going to be something else, and will only make for an even better fight.

“I’m also delighted to be working with Fightzone on this show. It’s great to have this card televised and for these fighters to have their hard work and talent on display to an even bigger audience.”