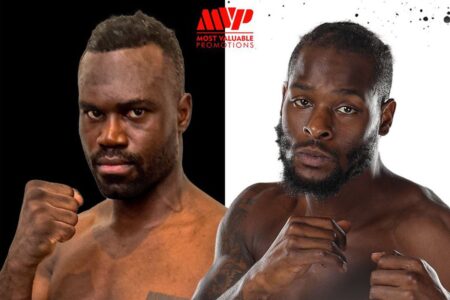 Most Valuable Promotions and SHOWTIME SPORTS® has announced that former NFL star running back Le’Veon Bell and elite mixed martial arts striker Uriah Hall will face off in a professional boxing match on Saturday, October 29 as part of the SHOWTIME PPV event headlined by Jake “The Problem Child” Paul vs. UFC legend Anderson “The Spider” Silva at Desert Diamond Arena (formerly Gila River Arena) in Glendale, Ariz., just outside Phoenix. Both Bell and Hall will make their pro boxing debuts in a four-round cruiserweight bout contracted at 195 pounds and will come face to face for the first time during a virtual press conference on Thursday, October 13 hosted by Ariel Helwani. Tickets for Paul vs. Silva are on sale now and can be purchased at ticketmaster.com.

A strong, intimidating presence with a piston-like right hand, Hall is a 38-year-old former MMA standout who made his mark in both UFC and BELLATOR as a vicious striker. Hall (17-11, 14 KOs MMA record) is tied with Silva and Thiago Silva (no relation) for the most KO/TKOs in UFC middleweight history with eight. Born in Jamaica and raised in New York, Hall showcased his finishing skills when he knocked out Adam Cella with a spinning back kick to the head in the first round of a bout in The Ultimate Fighter series. That performance earned him comparisons to MMA legend Anderson Silva. Hall and Silva eventually met in 2020 with Hall walking away with a fourth-round TKO. He went on to beat former UFC middleweight champion Chris Weidman in April 2021 via first-round knockout as Weidman suffered a gruesome leg injury just 17 seconds into their bout. Hall started his career 4-0, highlighted by a TKO victory over Edwin Aguilar at BELLATOR 11. He is currently trained by Sayif Saud at the Fortis Gym in Dallas, Texas.

“Le’Veon Bell, I hope you bring your best,” said Hall. “I know I will. Thank you to Most Valuable Promotions for the opportunity.”

A former Michigan State standout and top NFL running back for both the Pittsburgh Steelers and New York Jets, Bell is no stranger to boxing. The Columbus, Ohio native spent the past seven years sharpening his boxing mechanics as he readied himself for the gridiron, and that fluency in a boxing ring was on display last month when he flattened legendary NFL running back Adrian Peterson with a one-punch knockout that quickly went viral. Bell and Peterson clashed in an exhibition bout that was conducted under the auspices of the California State Athletic Commission with CSAC officials. The bout ended in the fifth round when the 6-foot-1 Bell connected on a straight right hand that put Peterson on his back and rendered him unable to continue. It was a startling display of power, not unlike Jake Paul’s one-punch knockout of Tyron Woodley last December, and it showed off Bell’s commitment and proficiency in boxing. The 30-year-old Bell has relocated to Los Angeles, where he currently trains full time at the Fortune Gym under the watchful eye of respected, no-nonsense trainer Justin Fortune, famous for his work with boxing legend Manny Pacquiao. Known for his long strides and ability to stop on a dime and accelerate, Bell played in the NFL from 2013 to 2021, also suiting up for the Kansas City Chiefs, Baltimore Ravens and Tampa Bay Buccaneers. He was a two-time First Team All-Pro, two-time Second Team All-Pro and three-time Pro Bowler.

“As soon as Most Valuable Promotions approached me about joining the Paul-Silva pay-per-view, I told them, ‘I want in,’ and didn’t care who the opponent was,” Bell said. “Uriah Hall is going to feel my punching power and tap out like he’s getting submitted. He is not built like me.”

“Adding NFL superstar Le’Veon Bell to the card only increases this fight’s star power and to have him go head-to-head with a fighter as experienced and dangerous as Uriah Hall – it’s going to be fireworks,” said Jake Paul. “Taking on this challenge is proof that Bell, like myself, is serious about professional boxing and after his knockout of Adrian Peterson, he looks like a force to be reckoned with. Hall on the other hand has already proven himself multiple times in the UFC, and we know what he is capable of. I’m keeping a close eye on this one and may even take on the winner in the future.”

“I’m just as excited to watch Hall vs. Bell as I am for Paul vs. Silva. You have a legitimate top-10 MMA striker versus a world-class athlete who has proven he has true boxing skills and knockout power,” said Nakisa Bidarian, co-founder of MVP. “This fight elevates our pay-per-view to a new level, and these guys will undoubtedly put on an unforgettable fight for the fans in the stands and those tuning in.”

International superstar and serial risk-taker Paul will face the biggest challenge of his career when he takes on UFC legend and accomplished boxer Silva in an eight-round bout at a catchweight of 187 pounds. In undercard action, teenage sensation Ashton Sylve will put his knockout streak on the line against Braulio Rodriguez in an eight-round lightweight bout contested at 133 pounds. Chris Avila, a disciple of UFC superstar Nate Diaz, will square off against “Doctor Mike” Varshavski, a board-certified family physician and social media influencer, in a four-round cruiserweight bout contracted at 185 pounds.

The Hall vs. Bell press conference hosted by Helwani will be held on Thursday, October 13 (1 p.m. ET/10 a.m. PT) and streamed live via the SHOWTIME SPORTS YouTube channel. The Paul vs. Silva event is co-produced by SHOWTIME PPV and Most Valuable Promotions (MVP) and promoted by Holden Boxing. The pay-per-view telecast is produced and distributed by SHOWTIME PPV. 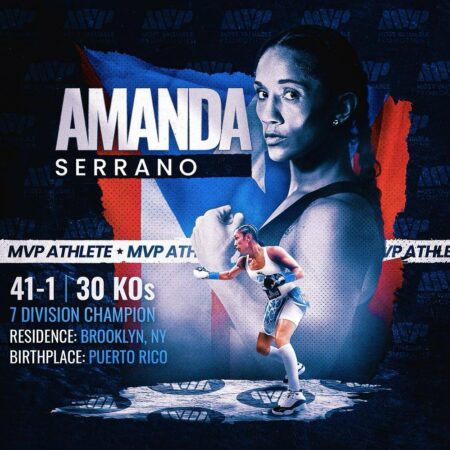 Multiple world champion and WBC featherweight champion, Puerto Rican Amanda Serrano has signed with the company Most Valuable Promotions, co-founded by youtuber Jake Paul, who has recently ventured into the world of boxing.

Serrano is a seven-division boxing champion who has held nine titles from 115 pounds to 140 pounds. She holds the Guinness record for most boxing world championships in different divisions.

The 24-year-old American youtuber shared part of his training camp with Serrano for the card in which both achieved important victories.

It`s expected that a fight between Serrano and Irish Katie Taylor, also considered one of the best fighters today, can and will soon take place.