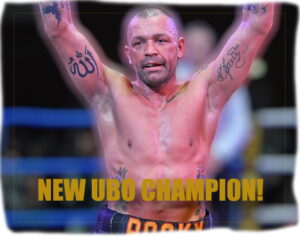 Pawlak was originally scheduled to fight Selim Sarialioglu, but when he pulled out with an injury on short notice, Turkey´s Arifogullari, already in training for a title fight at Super Middleweight, stepped in to save the day.

Unfortunately the late substitute didn’t acquit himself very well. After a slow first round, Arifogullari was counted over in round two when Pawlak unloaded a series of body-shots and only the ropes held him up, and in the third he was floored again by a left hook to the body.

He beat the count, but then went on to push Pawlak out of the ring. While he also fell out of the ring himself, referee Kazim Kurnaz decided it was an intentional foul and that Arifogullari should be disqualified, consequently declaring Pawlak the winner.

Promoter of the fight was Elinboxing Boxing promotion.