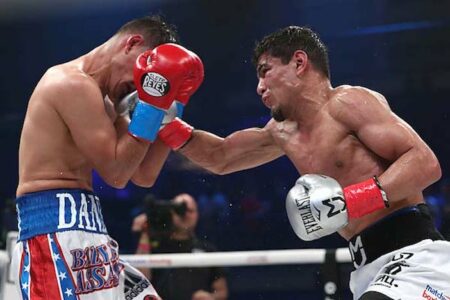 The mandatory fight for the World Boxing Association (WBA) Super Bantamweight Super Championship between Murodjon Akhmadaliev and Ronny Rios was announced for November 19 as part of the Matchroom Boxing event to be promoted that day at SNHU, Manchester, New Hampshire, United States.

Akhmadaliev and Rios were ordered to fight by the championship committee and a Purse Bid was held on May 24, won by the British company.

The 26 year old Uzbek is the owner of the belt and also holds the IBF belt, both of which will be up for grabs on November 19. It will his second defense of the black and gold title he won it on January 30, 2020 by defeating Daniel Roman by split decision in Florida. He returned to the ring in April of this year to knock out Japan’s Ryosuke Uwasa in his home country.

Now he will face a Rios who has been dreaming of this opportunity for years and now has the chance to become world champion in front of him. He is on a winning streak of four wins with three knockouts , which gives him the confidence and security to challenge the champion.

Other important fights were announced at the event, such as the WBA super lightweight champion, Kali Reis, who will face Jessica Camara in the beginning of the tournament that will put four top fighters of the category with the goal of winning the four belts.