Unbeaten Ryan Woolridge headlined the show at The Willows in Willenhall against the ever durable M J Hall writes Paul Webb. The 21 year old was coming in fresh off a win on Frank Warren’s Birmingham card in November and the Bloxwich based super welterweight boxed nicely, with a disciplined performance against the cagey Hall taking a 40-37 points decision.

Irishman of Congolese descent Francy Luzoho boxing for the first time in England made quite the entrance and backed up the pre fight excitement with a comfortable win over Romanian Constantin Radoi. A recent move to Shiney Singh’s gym will see Luzoho basing his career on these shores and he got off to the ideal start taking a 40-37 points decision.

World ranked Ijaz Ahmed kept himself busy with a dominant display against Luke Merrifield. The former WBO European super flyweight champion has plenty of options next in what should be a big year and he showcased his talent taking every round on referee Shaun Messer’s card 40-36.

Mussab Abubaker handled a tricky four rounder against road warrior Kevin Macauley showing a lot of patience and quality shot selection taking a 40-36 points decision . The 29 year old moves on to 6-0 and is hoping to step up to 6 rounders in the near future.

Lewis Morris kept his unbeaten record intact in his first outing of 2022, out-pointing Ricky Leach 40-36. It was a solid night’s work from the 20 year old bantamweight, one of the many young prospects boxing out of Richie Carter’s Wolverhampton boxing club.

Marco Simmonds made an impressive start to life as a professional boxer beating the experienced Paul Cummings on points 40-38. The 21 year old has a very limited amateur experience but he settled nicely, wobbling his opponent in the opener and then displaying good footwork and hand speed to out box the taller Cummings.

Connor Parker overcame a challenging cut to take a decisive 40-36 points victory over Bulgarian Iliyan Markov. The former Midlands champion boxed smartly and looks ready to get back in the title mix after back to back wins.

Mussab Abubaker is planning to ramp up the rounds as his pro grounding continues.

He will step through the ropes when BCB Promotions are at the Willows (Bath Street), in Willenhall, as part of a Sunday afternoon show on March 27.

His sixth paid outing comes after five pro victories, all four-rounders, but he’s only boxed once since the pandemic, which netted him his first early finish.

Opponent Kristian Marrey was forced to retire, with an arm injury, after just two rounds of their bout in December, Abubaker’s first in nearly two years.

‘Breaker’ has passed four years as a pro, debuting in late 2017 with a lively affair against Danny Little, dropping and outpointing him through a 39-37 scoreline.

The 29-year-old Brummie, from Small Heath, only featured once in 2018, a landslide 40-36 points success over Paul Cummings, three months before tragedy struck that May.

His brother, Abdul Rahman Abubaker, was gunned down at a street barbeque in Highgate, Birmingham, and later died from being shot in the chest. He was just 24.

Abubaker notched two more 40-36 points whitewashes, during 2019, at the expense of Dale Arrowsmith and Scott Williams, and remains unbeaten in the super welterweight division.

He said: “It will be good to get back in there again, I’ve had a decent camp and I just wanted to get a fight in before Ramadan, so I could kickstart the year.

“I want to get a bit of momentum going and I’m hoping this will be my last four-rounder, before I make the step up to six or maybe even eight rounds.

“I’m learning, because I didn’t have much experience before turning pro (two unlicensed bouts, both wins), and I’ve been practising on pacing myself, rather than rushing in.

“It’s a good time to get myself going again, this is another goal to hit and I could do with all four rounds. My last one ended far too quickly.

“I’m normally been a slow starter, but I felt like I was catching him. I don’t really know what happened, after that, all I knew is that the guy pulled out because he’d hurt himself.

“To have that two-year gap (because of the pandemic), before that, has made a lot of us feel like we are starting again, so I need to build my experience up quickly.

“I want to see how far boxing can take me and, of course, I’d love to go for a title one day, that would be very important to me.”

Tickets for the Willows bill are available, priced at £40 standard or £75 VIP ringside with buffet, directly from the boxers or by visiting myfighttickets.com. 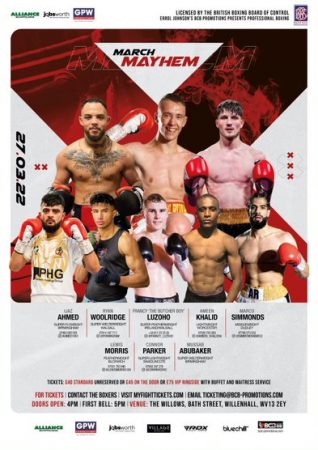 A host of BCB fighters are in action at The Willows on Sunday, 27th March 2022.

Birmingham’s WBC and IBF European Super Flyweight Champion, Ijaz Ahmed, is in action. ‘Jazzy’ was due to fight Quaise Khademi in December in a trilogy fight but Khademi pulled out with injury.

Popular Walsall super welterweight, Ryan Woolridge, features as he looks to move to 3-0 in the paid ranks after a stellar amateur career.

Tickets, priced at £75 VIP and £40 standard, are available from the boxers or by emailing ticketing: bcb-promotions.com. They can also be purchased at MyFighttickets.com 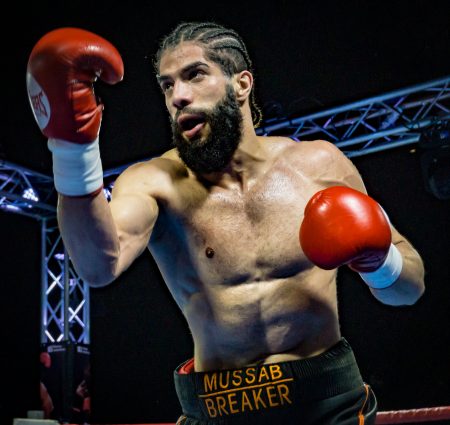 Mussab Abubaker is looking on the bright side as he aims to breathe fresh life into his professional boxing career.

He’s back in action at the H Suite in Edgbaston, Birmingham, for Friday’s fight night on December 17, with the show being staged by BCB Promotions.

Abubaker will be four days short of two years since he last engaged in competitive combat and has had a broken hand to recover from, in the meantime.

The born-and-bred Brummie, from Small Heath, has also been concentrating on growing his business, the Bubble Rolls Dessert Shop on Ladypool Road in Sparkbrook.

The 28-year-old super welterweight now resumes a pro ledger that was 4-0 at the end of 2019, after outpointing Scott Williams in a four-round points landslide success.

Three out of those four victories have come by the same verdict, a 40-36 points whitewash, with Abubaker keen to step up from four rounds to six in early 2022.

‘Breaker’ debuted in late 2017, overcoming Danny Little by a 39-37 points call, after dropping the journeyman in the second round.

That was at what is now the H Suite, where he returned to shut-out Dale Arrowsmith in March 2019, after a 2018 vanquishing of Paul Cummings.

As a pro, Abubaker has never boxed outside of Birmingham and is relishing the prospect of performing in front of a home crowd again.

He said: “I’ve had my misfortune, but I feel like I’ve turned negatives into positives. I’m injury-free again, my business is still going strong and I’ve refurbished the shop.

“I broke my left hand in sparring and it’s taken over a year to recover. I would estimate that it’s at 95 per cent now, although it seems to be working well again.

“Perhaps I was being extra-cautious but, when I first got back into training, I couldn’t use my left hand at all. It certainly won’t bother me in the ring, when the adrenaline kicks in.

“I was 4-0, before the pandemic, and I was two weeks away from my fifth fight when Covid hit, so I just want to get the ball rolling again.

“I’ve been working in the gym on the things that I want to improve on, which is mainly just to relax a bit more. Once I master that, you will see the difference in me.

“I didn’t have any amateur background, so there are some elements of boxing that I’m still getting to grips with, but it will all come together.

“With how long I was out, it’s almost like starting over again, so my target is to improve on the performance from last time, however long ago it was!

“I’m just planning to take it step-by-step and build my boxing career back up slowly. I don’t feel any more pressure than facing my next opponent.”

Tickets for the H Suite bill are available now, priced at £40 standard or £75 VIP ringside with buffet, directly from the boxers or by visiting myfighttickets.com.