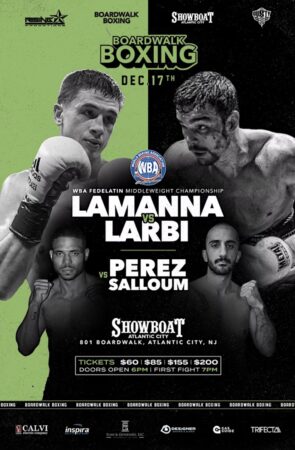 The card is promoted by Rising Star Promotions.

LaManna, of nearby Millville, New Jersey, is ranked number-eight by the World Boxing Association (WBA), and has a record of 33-5-1 with 13 knockouts.

Now 31 years-old, LaManna has been a professional for 11 years and the favorite of Atlantic City, will be making his 22nd appearance on the boardwalk and third at The Showboat.

LaManna won his first 16 bouts, and has wins over Kendal Mena (20-3), Matthew Strode (25-6), former world title challenger Mike Arnaoutis and his last bout when he won the WBA Fedacarible title with a 10-round unanimous decision over Michael Marcano (25-5-1) on September 8th in Colombia.

“I am Glad to be back headlining in Atlantic City in a meaningful fight, and like I’ve said in recent months, I’m just glad to be back in general, especially when I thought it was all over for me. Salim is a experienced veteran but I feel I’m on another level,” said LaManna

Larbi of Rahway, New Jersey is 22-11-3 with eight knockouts. The 35 year-old Larbi began his career in France and has fought all over the globe. Larbi has quality wins over Davit Makaradze (16-4-1) and Patrice Sou Toke (17-2). Larbi is coming off a draw with Nicholas Hernandez (20-4-1) on December 11, 2021 in Harrisburg, Pennsylvania.

In the eight-round co-feature, popular Albanian heavyweight Kristian Prenga takes on an opponent to be named.

Prenga of Orosh, Albania and now residing in Niagara Falls, Ontario is 12-1 with 12 knockouts. The 31 year-old has fought in Germany, Albania and Canada, before campaigning in the United States, has knockout wins over Jaime Barajas (2-0-2), Aldo Colliander (15-2) and his last bout he disposed of Alvin Davie in two rounds on November 12th at The Showboat.

Paul Bamba (5-2, 4 KOs) of New York, New York will take on an opponent to be named in a light heavyweight contest.

Dan Murray (6-6) of Lanoka Harbor, NJ battles an opponent to be named in a junior welterweight tussle.

Tyrell Bostic (7-1, 1 KO) of Wyandamch, New York fights an opponent to be named in a junior welterweight contest.

Jabril Noble (4-0, 4 KOs) of Philadelphia will take on an opponent to be named in a four-round lightweight bout.