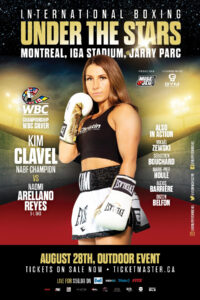 Finally NABF champion and WBC # 1 contender Kim Clavel is back in a ring in Quebec for her first career fight at the IGA Stadium in Montreal on August 28th. The wait was long, the procedures laborious, the requirements numerous, but finally GYM received the approval of its sanitary protocol from both the Montreal Regional Public Health Direction and the Quebec Public Health Direction. GYM would like to thank Mr. Daniel Tierney and his DRSP team for their important collaboration.

Clavel (13-0, 2KO) will face powerful Mexican challenger Naomi Arellano Reyes (9-1, 5KO) for the prestigious WBC Silver title in a 10-round showdown. Reyes has won her last five fights including four by knockout. In her last fight in November 2020, she beat former world champion Carina Moreno (25-6-0, 6KO) by decision. Clavel will return to a Quebec ring for the first time since November 2020. In her last outing she took the measure of Barbara Munoz in Cuernavaca, Mexico.

This event will also mark the return of world contender Mikael Zewski (34-2-0, 23KO), who led on points against Egidijus Kavaliauskas in Las Vegas in his last fight in September 2020 before making a mistake in the 8th round. The charismatic Trois-Rivières’ resident has only second defeat in 36 professional fights, and he intends to return to victory and relaunch his international career with an impressive showing in August. For this occasion, Mikael will make the jump to the 154-pound super welterweight division. His opponent will be 23-year-old Dilan “El Tremendo” Loza (15-4-1, 9KO), a tough, young brawler fighting out of Mexicali.

Sébastien Bouchard (19-2, 8KO) has been bothered by injuries in recent years and this will be the first time since 2018 that he will compete in two fights in the same year. In his last outing this past March, he stole the limelight at the Plaza Quebec hotel in Quebec City, fighting Ontario Mario Perez (20-7-5, 12KO) for a spectacular victory by decision. Based on his performance, the Quebecer has shown that he has recovered from his injuries, and he intends to make up for lost time. He will face veteran left-hander, former world contender, American Cleotis “Mookie” Pendarvis (21-8-2, 9KO), fighting out of Los Angeles.

A total of nine fights will be scheduled involving several local hopefuls in action. The spectacular Marie-Pier Houle (3-0-1.1KO) versus. Jeanette Zapata (2-3-0, 0KO) of Mexico, skilful heavyweight Alexis Barrière (2-0, 2KO) against Angel Barron, of Mexico, and the talented Mazlum Akdeniz (13-0-0, 7KO) will have the opportunity to display their talent.

This will be the sixth time that GYM has presented a boxing gala on the center court of the cozy tennis stadium and each time it was a resounding success. Former world champions Joachim Alcine, Jean Pascal, Adonis Stevenson, David Lemieux, and Bermane Stiverne all left their mark there between 2006 and 2010. On the unforgettable evening of June 8, 2007, when in the middle of the IBF super lightweight IBF title Eliminator between Quebecer Hermann Ngoudjo and American Randall Bailey, a deluge flooded the amphitheater, fuses blew and there was darkness for a few minutes, live on the American television channel ESPN2. This event eventually received the 2007 ESPN Boxing Event of the Year.

This event under the stars will also be available on pay-per-view on Canal Indigo, Bell TV, Shaw TV and on Fite.TV for $ 49.99.

Kim Clavel, unbeaten in 13 professional fights has had an incredible journey since the start of the pandemic in March 2020. She was to be the main star of a series of events at the Casino de Montreal to bring her to a world title fight at the end of her fifth fight. This Series resulted in her professional boxing career leading to a whole new dimension. A week before her first fight, the COVID-19 pandemic completely upset her plans. Instead of complaining and doing nothing, she decided to take over her nursing career and put herself at the service of CHSLDs to help the elderly confined to their rooms, facing this pandemic that was sweeping all over the planet. It was with great self-sacrifice and courage that she set about the task for endless days due to the shortage of personnel and without much protection. The enemy being, at that time, fairly unknown in terms of the vaccine’s full impact.

Kim took on this fight quite naturally just wishing to make herself useful without realizing that her story would touch the planet and become a huge source of inspiration during these difficult times:

•      First. in May 2020 the North American champion (NABF) received the “Hero of Humanity” award from the World Boxing Council at the same time as did the great international stars Manny Pacquiao and Juan-Carlos Ramirez for their social involvement.

•      In June 2020, she received the “Pat Tillman Award” during the annual ESPY gala on ESPN, which commenced in 2014, for being a person with a strong connection to sport and who has served the population with the spirit of service, duty, and altruism. It was the first time that this honor had not been bestowed on an American.

•      The following July, ESPN and US promoter Top Rank offered Clavel a fight live on US television against American Natalie Gonzalez, which the Quebecer won by unanimous decision.

•      In December 2020, in her last fight she faced Barbra Munoz in Cuernavaca in Mexico where she won her 13th professional fight.

•      In January 2021 the WBC, during its annual awards ceremony, awarded 2 important prizes to Kim; that of “Hope of the Year” and that of “The most inspiring athlete”

•      Thanks to her new notoriety Kim Clavel was invited to participate in “Big Brother Celebrity” of Noovo where she finished in 3rd position after 13 weeks of reclusion.

Kim Clavel doesn’t shy away from flaunting her “Girl Power” beliefs as she has a deep belief in gender equity no matter what. GYM has always been extremely successful when presenting its events at the Jarry Park Stadium. This morning, Canada finds itself in 11th place at the Olympic Games in Tokyo thanks to 10 medals won, all by women, which demonstrates the major contribution of girls to the sporting success of our country on the international scene. We know that the people in Quebec promote and enact gender equity in all areas of our society. Coming to attend the professional boxing gala where the main star is a woman would be a confirmation of this direction.

We are convinced that Kim Clavel’s return to the ring should generate tremendous interest and will spark major popular excitement! on August 28 at the IGA Stadium, Kim Clavel returns with great pomp and circumstance to the ring, her first fight in Quebec since December 2019. It marks the return of international boxing in Canada as well as the relaunch of GYM activities. If she wins the WBC Silver title, she will become the mandatory contender for WBC champion Yasenia Gomez, whom she could face this year with a victory at IGA Stadium. A special event not to be missed!