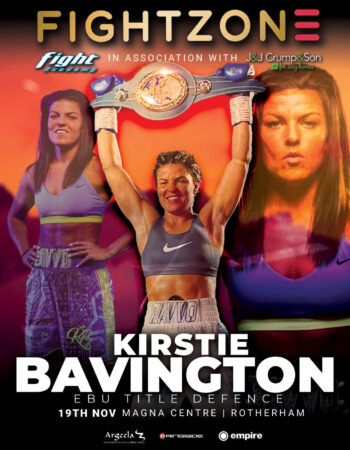 Women’s boxing is flying at the moment and, at the Magna, the 30-year-old will take on Germany’s Naomi Mannes in another great match for the female fight game.  Mannes comes into the contest unbeaten and with a reputation for heavy hands after four KO wins from her six fights to date.

With just two defeats from 10 outings, ‘Bavvo’ is also in great form.  Currently on a three fight winning streak which has included an ‘upset’ victory over highly-touted Geordie April Hunter in October last year – the fighter from Wolverhampton is now hoping to follow in the lofty footsteps of stable mate, Hannah Rankin, after recently signing with Fight Academy and Fightzone.

Rankin’s amazing journey on Fightzone has included winning world titles and a historic defence of her belts on a glorious Glasgow evening at the Hydro Arena in May of this year.  Despite a recent defeat to Terri Harper – Hannah will be back on the title trail soon and Bavington is confident of emulating her success.

“I’m excited to be making my Fightzone debut.  It’s new to me and a bit like fighting away from home so I can’t wait – it’s been a long camp and I just want to get in there now.

“Mannes looks like she can do a bit.  I just need to concentrate on my own game and give her no breathing space for 10 rounds.  I’m a hard worker, a pressure fighter so I’ll put it on her and see what she’s got.  No one she’s boxed can fight like me, so we’ll see what she can bring when she’s under pressure.  She’ll give as good as she gets and it’ll be a good one for the fans to watch.

“I’m not looking past Saturday but I want to work up to a world title and I know Noel [Callan] and Fight Academy will help me with that journey.  Fightzone will create the platform for me to get to the top like they did with Hannah, and they’ll give me the exposure.

“I believe I can beat anybody and I have a good mindset.  If any of the world titles of [Jessica] McCaskill’s become vacant then I’m confident of taking the opportunity – I’m ready all the time.  But this is a tricky fight [on Saturday] that I’m not taking my eyes off.”

Fight Academy’s Dennis Hobson said: “We’ve had an amazing ride with Hannah Rankin so far, and that journey is definitely not over yet.  Kirstie is another top fighter and myself and Steve Crump are so pleased to add her to the Fight Academy stable.

“Kirstie is always in a good fight and is improving all the time.  She’s constantly in the gym working on her game and is a fantastic example and athlete.

“We’ve already proved that we can produce world champions on Fightzone.  It’s a brilliant platform for the fans and I know that Kirstie is going to be a huge hit.” 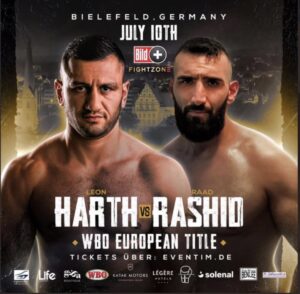 Round 1: Cagey first half of the 1st round, but local man Harth opened up more with some quality punches to end the round.

Round 2: Harth in full control of the round having Rashid on the backfoot.

Round 3: In a closer but scrappy round, another round controlled by Harth.

Round 4: Tentative at times with Harth throwing some swinging bombs, and just missing, the round again was controlled by Harth.

Round 5: Harth was dominant from the beginning, dropping Rashid by the ropes. He barely beat the count. The referee allowed him to continue but was dropped again with the referee waving the bout off.

Fight Notes: The 42 year-old Torres was game throughout the 4 rounds but was under heavy pressure at the end of the 4th round. Torres picked up a shoulder injury between round 4 and 5 and the referee stopped the fight.

It is recorded as a TKO victory in the 4th round.

Fight Notes: Malinovic was down in round 1 courtesy of a Tahiri left hand. “Kid Dynamite” Tahiri finished Malinovic with a powerful left hook and the referee immediately waved off the fight with Malinovic flat on his back, halfway through the ropes.

Time of the stoppage was 2:50 of the 3rd round with the MC announcing a KO win.

Fight Notes: Mueller was in full control and put Avetisiani dropped in round 2 from a body shot. He was down again from a slip in the 3rd round then a further two times in round 3 from blows, with the referee waving a the bout off after the last knockdown of the round.

Fight Notes: The bout went the 6 round distance. It went as expected with Garmoui in full control of the fight, winning every round. Escobar was game but had not fought since 2017.

Fight Notes: The bout went the 6 round distance. The bout was declared a draw in a wild and fun to watch shoot-out between an inexperienced fighter that has blown all fighters away and a journeyman that turned up with plenty of ambition that fancied the job. One judge has Jajanidze the winner but the two other judges had it a draw (Majority). Fair result with no hometown decision that was refreshing.