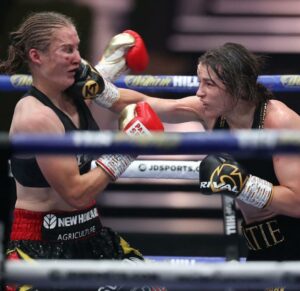 A year that began with a scattered activity along with a thousand programs ahead. All suspended by force majeure. Boxing entered a break of more than six months that, despite the difficulties, managed to be fruitful, an energetic recharge to come back with the gloves on. Women took center stage in 2020 and were able to show the results of a maturing process which led to the spectacular female boxing that was seen in recent months.

She was the prodigy of the family, between throwing punches with her fists and making the ball dance with her feet. Skilled, dedicated, willing and committed, Irish Katie Taylor became number one of the world. This 34-year-old woman conquered every fan on the planet after performing in one of the great battles of 2020 against the strong Delfine Persoon in August. Then, in November, she faced the former interim World Boxing Association champion Miriam Gutierrez in another great presentation. Thus, Taylor took the absolute reign in the 135 pounds with four belts.

On the other hand, we lived the great surprise when Jessica McCaskill stripped “The First Lady” Cecilia Braekhus of her long reign. McCaskill not only took away her undefeated record but also took the five belts at 147 pounds. This has been one of the most sensitive moments for boxing lovers who, in spite of the surprise, welcome the new female boxing age with the competitiveness and quality of fights that had been so expected. McCaskill convinced everyone and was recognized as the revelation of 2020.

Expanding the market and exceeding expectations is one of the goals that many female fighters have achieved. The firm Super Featherweight Champion, Hyun Mi Choi, appeared for the first time in North America with great success against Calista Silgado. And, speaking of debuts in the US, we must mention the great victory of the Swedish Elin Cederros who dethroned the local Alicia Napoleon in a very close fight. Cederros has been crowned since January 10, 2020 with the WBA Super Middleweight championship, along with the IBF championship which she already owned. This is another example of the competitive growth within female boxing.

Among the aforementioned consolidations, we have the radiant Canadian Jelena Mrdjenovich, who retained her 126-pound WBA belt in an intense fight against Mexican Iranda Paola Torres.

Two of the new WBA champions in 2020 who stood out were: Nazarena Romero in the Super Bantamweight division by winning the interim title with sporting prowess against Julieta Cardozo, also from Argentina. Also, Kali Reis from Rhode Island, won the 140-pound title, after defeating Kandy Wyatt.

In addition, it is worth mentioning the month of February when there were important events. First of all, a new edition of the historic KO DRUGS program took place in Panama. There, Venezuelan Mayerlin Rivas demolished the local Laura Ledezma to win the WBA Super Bantamweight title. Also, only days away, more than 11 delegations from different countries had the opportunity to experience the first training camp for the next Olympic Games in Tokyo. In this FUTURE WBA CHAMPIONS training camp, amateur and professional female boxing figures had the opportunity to test themselves during three days of fighting action, including Champion Yesica Bopp and her compatriot Erica Farias. 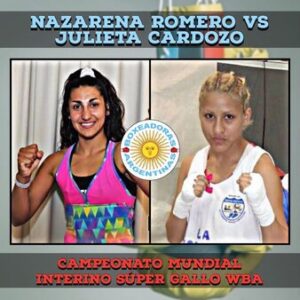 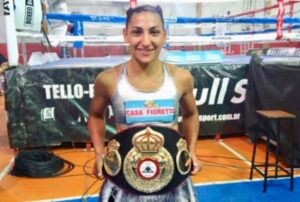 Fight Results: Time of the stoppage was 1:38 of the 2nd round.

Promotion: Sampson Lewkowicz in association with Tello Box.  Also with the support of the Agencia de Deportes de Córdoba, the Municipality of La Calera, and Agustino Cueros. From the the Club de Ajedrez in La Calera, Córdoba, Argentina and aired live on TyC Sports.